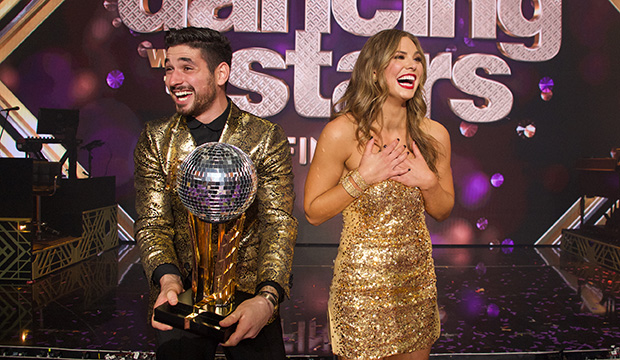 Despite all the rampant rumors and speculation over their dating status during “Dancing with the Stars” last season, Alan Bersten says he and Hannah Brown never let any of it affect them.

“We shut it all out,” Bersten told “Us Weekly,” adding that it never bothered them when everyone was wondering if they were dating, mostly because they knew it was coming.

“We knew people would talk and assume, especially because she was the Bachelorette and I’m still single,” he continued. “So we expected it, but we didn’t really let that get into our heads.”

Rumors started flying once viewers saw that the “Bachelorette” star was paired with Bersten, who had a cringey showmance with his previous partner, Alexis Ren, on Season 27 that’s responsible for some of the most awkward kisses ever put on TV. The duo broke up a few weeks after the season ended, after which Bersten said he was “done” with showmances, something he still swears by. “I learned after a few seasons to not mix business with pleasure,” Bersten said.

Bersten and Brown, who reunited Tuesday for a performance on the “Dancing” tour, spent all season denying and deflecting speculation and continued to do so after they won as fans wondered if sparks will fly with the season over. But the two have always insisted they are just friends.

“I think we were friends from the beginning and she went through so much on TV that she really confided in me, and we learned to trust each other,” Bersten explained. “And I think the trust aspect is what really helped us both come out of our shells and be ourselves, and I think that’s what the people really connected with. We were genuinely friends.”