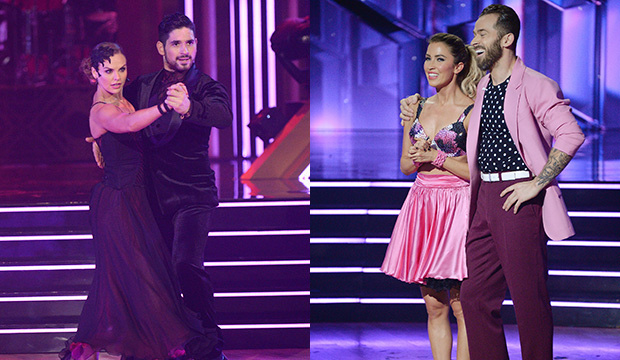 If there’s anyone who knows exactly what Kaitlyn Bristowe is going through on “Dancing with the Stars,” it’s her fellow Bachelorette Hannah Brown. The reigning “Dancing” champ endured some tough critiques from the judges, namely Carrie Ann Inaba, last season — something Bristowe is currently experiencing.

“I was such a crazy pants. I was crying all the time and I thought the judges were so mean to me,” Brown recalled on Bristowe’s podcast “Off the Vine.” “I did think they were the hardest to me. But I took it all so personal because I was so hurt.”

Inaba was the toughest on Brown, telling the former beauty queen that she looked “disconnected” from one dance. Their testy relationship culminated with Inaba clarifying that she doesn’t mean to be an “adversary” and Brown apologizing on air. But now, a year later, Brown has some perspective on it all.

“That was the whole thing with Carrie Ann,” she continued. “Like, she’s a woman, so she’s very intuitive, I think, of what my emotions were, and I’ll say she was right a lot of the time. But I’m like, ‘You can’t be right! Do not point out what’s happening on national television right now, because I’m going to burst into tears, and I am trying to keep it together.’ That was a lot of it. … And at that time [after ‘The Bachelorette’] I truly couldn’t handle it.”

Last week, Bristowe revealed that she cried after Inaba remarked that she felt like she “gave up” during her performance. On Monday’s show (Brown’s interview took place before then), things got a slightly tense when Inaba announced she would dock a point for a lift when Bristowe answered that she could not do a certain move on her own. Bristowe and Artem Chigvintsev tried to argue to no avail.

After the show, Chigvintsev said that Inaba’s comments were starting to feel personal because they’re not constructive. Bristowe noted the common denominator between her and Brown.

“I just want to know where it comes from. Is it from a place where you believe in us and you want us to do better?” she said. “Is it coming from a place of, ‘I was hard on Hannah and you’re another ‘Bachelor’ girl’? Where is it coming from and how are we supposed to take it and bring it into our next rehearsal? What do you want us to channel and use from it? It’s very hard to understand that.”

Inaba defended herself on “The Talk,” calling out people for “bullying” her and maintaining that the backlash will not affect the way she judges. “I’m 52 and I still get bullied. Right about this time is when people start to bully me because of the way I judge people. I can’t believe it still happens as adults,” she stated. “I want to tell people who bully, it doesn’t make me change the way I judge. I’m not about to change because you try to bully me. It only makes me stand stronger in my convictions and what I believe in.”