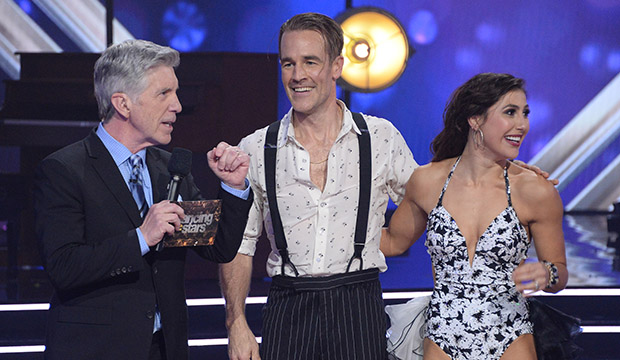 Little did anyone know that Season 28 would be Tom Bergeron‘s and Erin Andrews‘ final outings as “Dancing with the Stars” hosts, but James Van Der Beek, who finished in fifth place last year, is grateful that he finally did the show when he did.

“I loved Tom and Erin,” the actor told “Us Weekly.” “I count myself lucky that I got to do the show when they were there. ‘Cause I really, really appreciated just how they approached it and what they were for us in the eye of that storm.”

Calling the show a “crazy experience” because it’s “100 percent live,” the “Dawson Creek” alum praised the duo, who had been co-hosts since 2014, for juggling all the different moving and unpredictable parts. “In the middle of that was this guy who was so quick on his feet, so funny and so big-hearted,” Van Der Beek said. “Then you would go to Erin who just kept it a hundred percent real and also equally quick on her feet and just as big of a heart.”

Van Der Beek recalled his contemporary dance with Emma Slater, after which Bergeron encouraged him to hug his mom, Melinda, in the audience before getting his scores. Melinda passed away last month at the age of 70.

“After the contemporary, he looked over, saw her and put a hand in my back and just kinda nudged me to go over knowing that we had the time,” he recounted. “And so I did and I gave her a hug right afterward, and it was one of my top memories with my mom. I’m always grateful to Tom for creating that moment.”

The love between Van Der Beek and Bergeron and Andrews is mutual. “Thanks, buddy. I think I can speak for ⁦@ErinAndrews that WE felt lucky to be there when YOU were on,” Bergeron tweeted after seeing his comments.

Andrews concurred while jokingly lobbying for a part in a “Varsity Blues” (1999) sequel, which is something that definitely should happen. “Agreed! Thank you James!” she wrote. “Loved getting to know you and your family…and hoping for a role if you decide to do Varsity Blues 2.”

Agreed! Thank you James! Loved getting to know you and your family…and hoping for a role if you decide to do Varsity Blues 2 😉😜🏈🙏 https://t.co/eQACnxUXnH

Bergeron, who had hosted the show since its 2005 premiere, and Andrews were dropped as hosts last month as “Dancing” undergoes a revamp. Tyra Banks will replace them as the first solo host and will also serve as executive producer for the upcoming 29th installment.

“Tyra brings a whole different skillset and energy and vibe to the proceedings,” Van Der Beek said. “So it will be wild. They won’t have an audience this year. It’ll definitely be worth tuning in to see.”