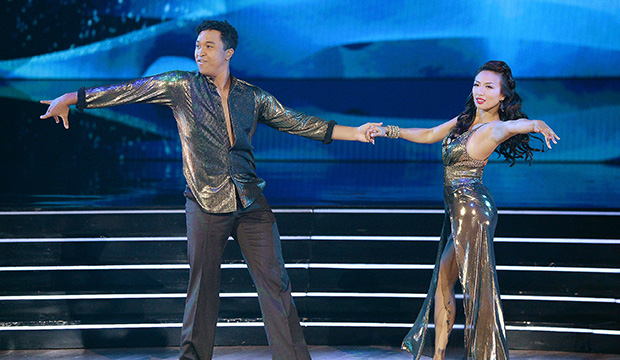 Jeannie Mai has withdrawn from “Dancing with the Stars” after being hospitalized with epiglottitis.

“My doctors discovered a health concern with my throat which requires immediate attention and surgery,” Mai told “Good Morning America” in a statement on Monday (watch below). “I am heartbroken that my ‘DWTS’ journey has to end here. “I have pushed myself to new limits physically and mentally, and I am so proud of how far we’ve come.”

Epiglottitis is a potentially life-threatening condition that occurs when the epiglottis, a cartilage over the windpipe, becomes inflamed and causes, among other things, a blockage of air to the lungs.

Monday’s show was scheduled to be a double elimination, but due to Mai’s withdrawal, it will now feature a single elimination with performances from the remaining eight couples.

SEE ‘Dancing with the Stars’ resurrects relays for Week 8

“Jeannie Mai will not be able to continue to compete on ‘DWTS’ this season due to a health concern that requires immediate attention. Jeannie has inspired us, along with millions of fans, with her energy and dedication. We wish her a full and speedy recovery,” “Dancing” said in a statement. “Since Jeannie had to withdraw from the competition, tonight’s show will feature the eight remaining couples and a single elimination.”

The “Real” host and her partner Brandon Armstrong were slated to perform a Charleston and participate in the Viennese waltz dance relay. The pair landed in the bottom two last week, but the judges saved them over “Cheer” coach Monica Aldama and Val Chermkovskiy.

“We are devastated by the news that we’re going to have to cut this season short, but Jeannie’s health does come first,” Armstrong said in a video. “Thank you to all the fans that have helped us get this far, and we are praying for a speedy recovery.”