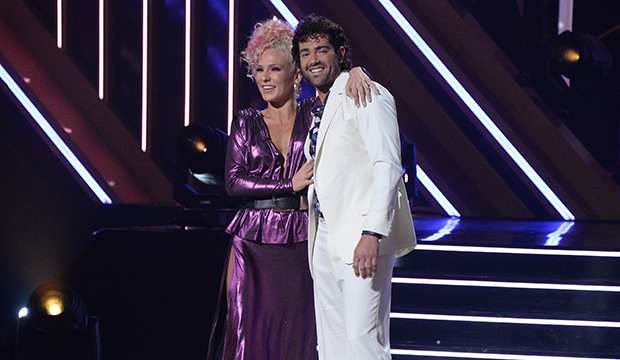 Jesse Metcalfe had realistic expectations on “Dancing with the Stars,” but he still didn’t expect to be eliminated fourth. “I was pretty surprised,” Metcalfe told “Us Weekly’s” “Watch with Us” podcast, adding that he’s not upset he was booted. “No, I wasn’t upset — it’s a reality show! I had an unbelievable experience.”

Metcalfe and Sharna Burgess scored a 19 for their tango and ended up in the bottom two with Vernon Davis and Peta Murgatroyd, whom the judges unanimously saved. The actor, whose highest score was a 21 on Disney Night, knew it would be tough to keep up in such a competitive group. “I thought I was gonna stick around for a couple more weeks,” he shared. “But with this cast, I don’t think I really had a shot.”

So who does he think will take home the Mirrorball? “I think Justina [Machado] is gonna win, but I’m also rooting for Johnny [Weir]. I think he’s really good as well. Those are my top two picks. AJ [McLean]’s a dark horse.”

One of the top scorers this season is Nev Schulman, whom Metcalfe calls a “gem,” but he thinks one thing might hurt the “Catfish” host. “Obviously, Nev is such a good dancer — such a good dancer — but people are not happy about the amount of dance experience that he has,” the “Desperate Housewives” alum said. “I don’t care that he has dance experience — I was never gonna win!”

Metcalfe also revealed that he was diagnosed with an arthritic hip three and a half years ago and has not yet had the recommended hip resurfacing surgery, so this was a lot more physical activity than his compromised body was used to. “It was a lot of wear and tear on this 41-year-old frame. But I thought I gave a very respectable showing. I loved every single minute of it,” he said. “I was more surprised by what an amazing experience it was and how incredibly rewarding it was. But by no means am I losing any sleep over getting voted off ‘Dancing with the Stars.’ But that’s not to diminish the experience. … From top to bottom, it’s such a fun experience, and it’s such a warm group.”

He added: “I love them all. No joke. What’s crazy about this group is that we got to spend very little time together due to the COVID protocols and yet I felt like the group gelled instantly. Everyone was very comfortable with themselves.”