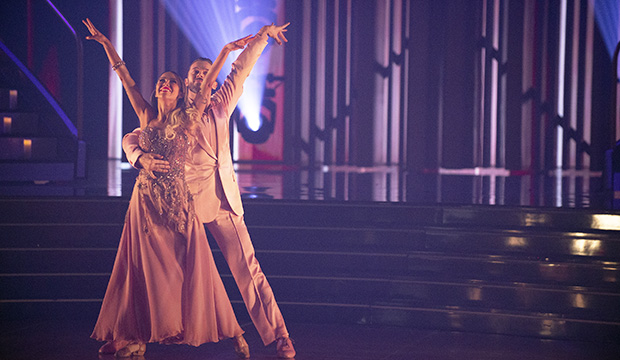 Kaitlyn Bristowe is “nervous” about performing on Monday’s “Dancing with the Stars” as she’s still nursing her right ankle injury.

The former Bachelorette danced through the pain last week to nab the highest score of the season so far, but shared on Instagram on Sunday that her “ankle is still so sore, which has really put a damper on rehearsing.” She had an MRI last week but has not gotten the results yet.

“We are waiting very patiently for the MRI results because nothing’s come back yet. I’m assuming I will have them at some point today,” Bristowe told “Good Morning America” on Monday. “I’ve been doing a lot of physical therapy, just certain stretches. We do icing, we do taping, we do [stimulation]. We’re doing everything possible and elevating it when I’m not dancing.”

For Disney Night, Bristowe and Artem Chigvintsev will perform the rumba to “How Far I’ll Go” from “Moana.” “Luckily, Moana is a little barefoot wonder and she can dance in bare feet, which helps my ankle,” Bristowe added. But her injury has meant cutting down rehearsal time dramatically. Plus, it also doesn’t help that they had already lost a whole day since last week’s episode aired on Tuesday instead of Monday. “So I’m really nervous for tonight,” Bristowe shared.

SEE Here is the lineup for ‘Dancing with the Stars” Disney Night (before you ask, yes, Carole Baskin has ‘The Lion King’)

If she makes it through the night, the “Off the Vine” podcast host will try to not think about the long road ahead to win since it’s only the third week. “If I’m thinking positively and long term being here for a while, it’s a little scary to think I’m going to have to nurse this thing the whole way though, but I’m trying to stay positive and go day by day,” she said. “But it’s definitely worrying me a little bit.”

“Dancing” returns to Mondays at 8/7c on ABC.