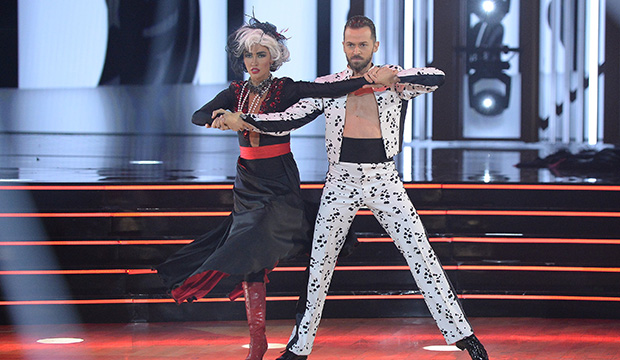 Kaitlyn Bristowe is still taken aback by Carrie Ann Inaba‘s remark that she “gave up” during her “Dancing with the Stars” performance Monday night.

“To hear that, I felt so defeated after. That was my all. I know I could have done better in some places, but I don’t feel like I ever gave up,” Bristowe told “People, revealing that she cried after the show. “I’m not a big girl and I cried in the corner after that. I cried a little bit, but that’s OK. I want to get better. I want to learn.”

The former Bachelorette and Artem Chigvintsev closed Villains Night with a “101 Dalmatians”-themed paso doble, earning a wide range of comments from the judges. The harshest came from Inaba, who also told Bristowe, “I felt like your spirit dropped.” The couple scored a 24, the second lowest score of the night. Bristowe said she welcomes criticism, but didn’t feel that Inaba’s assessment was “constructive.”

“If they want to be hard on me because they think, ‘Oh Kaitlyn has a dance background’ — I mean, everybody has an advantage in this competition. At the end of the day, voting counts,” she said. “For me, it’s one thing for Carrie Ann and the judges to be constructive. To hear a certain kind of feedback like, ‘It wasn’t my favorite’ or ‘I thought you gave up’ or ‘Your spirit was down’ … that’s tough to hear.”

Inaba’s critique also shocked other cast members, according to Bristowe. “I came off and so many people were like, ‘What? I don’t remember that,'” she recalled. “So people aren’t just sugarcoating it for me, because I want the feedback. I want to know if that’s what people saw. But to hear her say that, my soul was crushed, because I feel like this was one of the dances where I went out there and was like, ‘I’m going to hit this so hard and I’m not giving up.'”

Dubbing Inaba’s comments “bizarre,” Chigvintsev took umbrage with the implication that Bristowe doesn’t work as hard as the other contestants and implored the judges to give feedback that’s relevant to the routine at hand that could help them improve.

“It’s made to seem that she comes into rehearsals for one hour a day and go home and she knows the dance. That’s not true. She works four hours a day like everyone else and putting just as much work into it,” he said. “When your criticism is like, ‘I just didn’t feel it. I thought you gave up.’ That is not criticism you want to hear when you put your best effort into this week. … It feels bizarre,” he said. “If you didn’t like the choreography, I’d be like, ‘Great that’s something I can work on.’ I’m the one responsible for what I’m creating in the ballroom. I’m a big boy enough where I can take that criticism. I’m not going to go cry in the corner about that.”

This is, of course, not the first time Inaba’s given tough love to a Bachelorette. Last season, Inaba was very blunt with eventual champ Hannah Brown, telling her that she was “disconnected” and was “lacking” something in her performance (coincidentally, also on the Halloween episode). It snowballed to a point that Inaba had to clarify during a rehearsal that she never meant to be an “adversary,” and Brown apologized on live on air, after which they hugged it out.