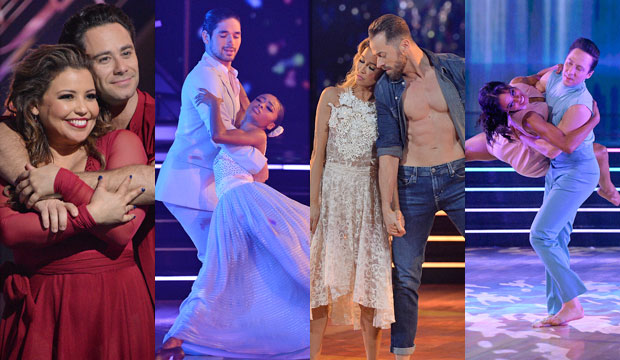 In every season of “Dancing with the Stars,” the judges start out at their most strict, pointing out technical improvements the contestants could make from footwork to posture, but they always warm to the contestants over time. The scores gradually go up because of the increased proficiency of the celebs, yes, but sometimes there’s just flat-out inflation, so if the judges get too generous too fast, it gets to the point where receiving a perfect 10 just doesn’t mean as much anymore.

In season 29 the judges have actually been pretty conservative. The first 10 didn’t come out until Skai Jackson‘s week-four routine in honor of her late co-star Cameron Boyce. The first perfect 30 out of 30 didn’t come until Nev Schulman channeled “Black Swan” during “Villains Night” in week seven. And it took two more weeks for two celebs (Schulman and Kaitlyn Bristowe) to get perfect scores on the same evening on “Icons Night.” But on “Semi-Finals” night, the judges gave eight perfect scores.

SEE‘Dancing with the Stars’ recap: ‘Semi-Finals’ ended with a double elimination, so who was left standing for the finale? [UPDATED LIVE BLOG]

Do I think the judges got carried away? Yeah, kinda. When two-thirds of the dances performed during the night were deemed to be perfect, what does perfect even mean? Especially when the judges gave those perfect scores all in a row, starting with Schulman and Bristowe’s redemption dances in round one, followed by all six dances in round two from Schulman, Bristowe, Jackson, Justina Machado, Johnny Weir and even Nelly, who had never even received a single 10 before that.

Don’t get me wrong, Nelly really did have a breakthrough with his jive. But were that; Jackson’s Viennese waltz; Weir’s jazz; and Machado, Bristowe, and Schulman’s contemporaries all exactly as good? Perfect scores in a competition don’t really signify much when the median score is perfect. And it sets up a finale where even a 9 will seem like a slight. Do you agree, or am I being a stick-in-the-mud? Watch all eight 30-point routines below and decide for yourself how many of them were perfect.