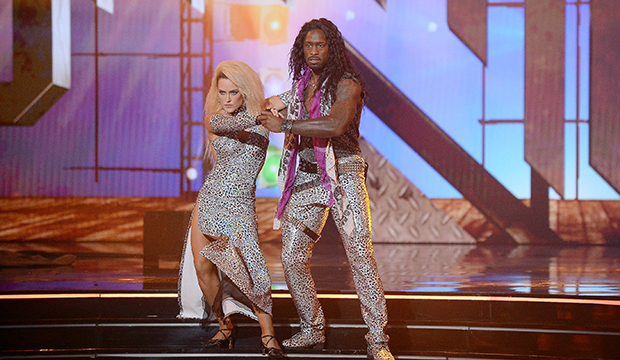 Landing in the bottom two was not Peta Murgatroyd‘s biggest concern on Monday’s “Dancing with the Stars”: She pulled her neck, but she is expected to be OK for next week.

“Sorry everyone tonight on @DancingABC I was absent from our spots after our dance. I pulled my neck and had to run to therapy,” the pro tweeted shortly after the show. “I’ll be ok but I needed to get it seen to ASAP. Thanks for the concern. Love you all and I’m looking forward to next week.”

Murgatroyd and Vernon Davis scored a 21 for their tango to Bon Jovi‘s “Livin’ on a Prayer” on ’80s Night and found themselves in the bottom two alongside Jesse Metcalfe and Sharna Burgess, who were eliminated. Murgatroyd appeared to be in discomfort as the pair received their critiques from the judges, at one point grimacing, stretching her neck and grabbing her right shoulder. She was MIA in their couple’s box following the routine, but returned to the stage for the elimination.

Sorry everyone tonight on @DancingABC I was absent from our spots after our dance. I pulled my neck and had to run to therapy. I’ll be ok but I needed to get it seen to ASAP. Thanks for the concern. Love you all and I’m looking forward to next week xxxx

The two-time champ further clarified in an Instagram Story that her stern demeanor was due to her injury as some fans started speculating that she was upset with Davis or their scores. “Vernon did a great job tonight and I’m proud of him,” she wrote. “I’m sorry if it came off any other way. I was in a lot of pain when the judges were giving their critics [sic]. Again, love my Vernon, nothing to do with him.” 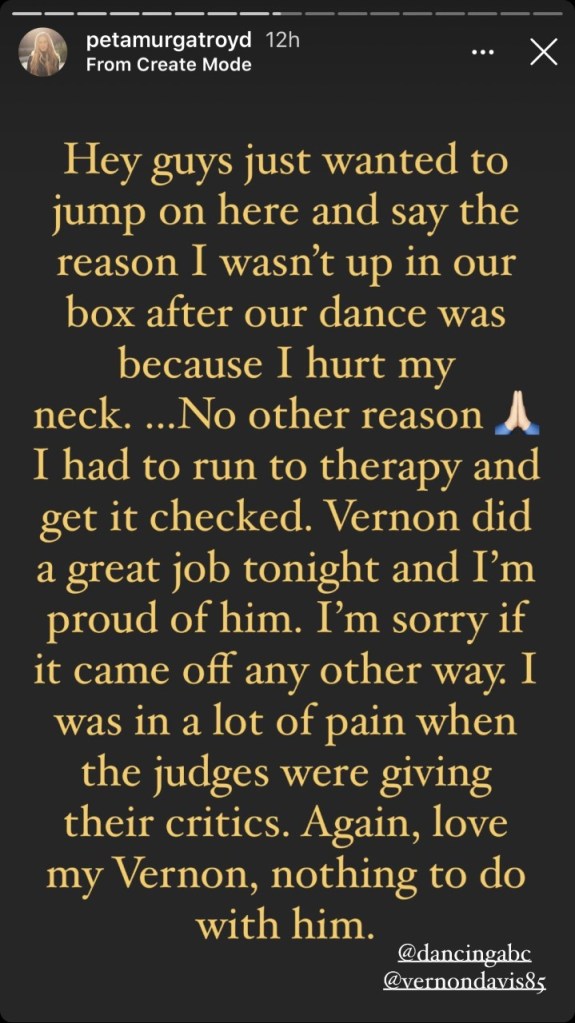 The couple received unanimous votes from the judges to stay, so hopefully her injury won’t hamper them next week. Murgatroyd’s injury comes three weeks after Kaitlyn Bristowe hurt her ankle and was a game-time decision to perform.