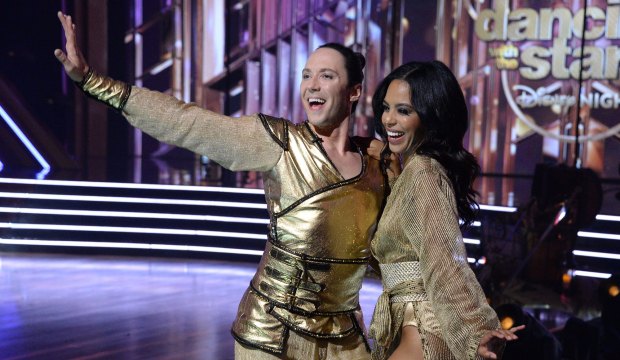 There are seasons of “Dancing with the Stars” where you can tell right away who the front-runners will be, sometimes before the celebrities even take the stage in the season premiere. Indeed, it wasn’t hard to guess that Broadway alum Jordan Fisher and Olympic gymnast Laurie Hernandez were the stars to beat in their respective seasons given their backgrounds. But season 29 turned out to be a lot more difficult to forecast. Consider who our readers were predicting as the top four when the season began, compared to who actually made the top four.

Sight unseen, we thought figure skater Johnny Weir would win the Mirror Ball Trophy — understandable, since three figure skaters have won before. But he never won over the fans he needed to go all the way, so despite consistently strong scores he was eliminated in sixth place during the Semi-Finals. Second place in our odds was Disney Channel actress Skai Jackson, which was also a pretty good guess. Her poise, flexibility, and posture were stellar, and she got some big scores, but she struggled with inconsistency, and her fan base wasn’t always reliable, so she was eliminated in fifth place during Semi-Finals.

SEEThere were EIGHT perfect scores during ‘Dancing with the Stars’ Semi-Finals – did the judges go overboard? Watch them all

Our other two early predictions were bigger misses. Actor Jesse Metcalfe ranked third: he fit the mold of the TV hunk with the physical fitness and audience appeal to succeed throughout the competition, but he never quite got his timing or musicality down, so he was eliminated in 12th place. And our number-four contender was singer AJ McLean: he might have followed in the footsteps of his fellow Backstreet Boy Nick Carter, who made the finals in season 21, but he made a couple of noticeable errors on “Icons Night” and was eliminated in seventh place.

So where did we place the celebs who did make the finals? We ranked “Bachelorette” star Kaitlyn Bristowe sixth, rapper Nelly seventh, actress Justina Machado ninth, and “Catfish” host Nev Schulman 11th. The surprise of the season really has been Schulman, whose reality TV career wouldn’t lead you to believe he’d have the dance chops, but now he’s the highest-scoring celeb of the season and the front-runner to win the Mirror Ball Trophy. If nothing else, this season has proved you can’t judge a book by its cover.