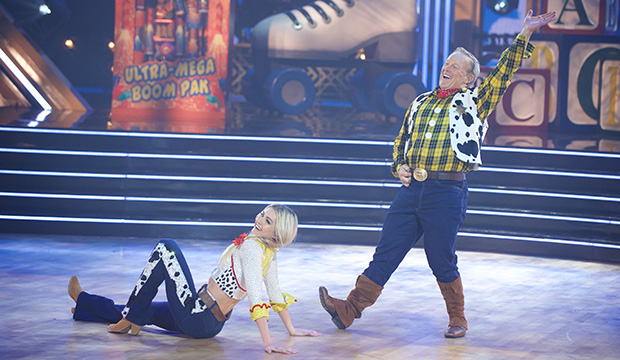 Despite the immense criticism, ABC Entertainment President Karey Burke has no regrets about having Sean Spicer on “Dancing with the Stars” last season. When asked if she stands by the decision to cast the former White House press secretary at the Television Critics Association press tour on Wednesday, Burke declared, “I do.”

Spicer’s casting immediately drew backlash last summer, as many felt his presence was normalizing the Trump administration’s hateful, hurtful politics. Host Tom Bergeron promptly released a statement, revealing that he initially had lobbied for and had been led to believe that Season 28 would be “a joyful respite from our exhausting political climate and free of inevitably divisive bookings from ANY party affiliations.” While Spicer kept politics off the show, as he had promised, it was his politics that clearly kept him on the show, as President Trump repeatedly tweeted for his supporters to vote for Spicer, who was, well, not very good at all.

Though he got the lowest score every week post-Lamar Odom, Spicer outlasted several good performers, much to fans’ and the judges’ chagrin, until he was eliminated in sixth place. A new rule gave the judges the power to eliminate one of the couples in the bottom two, but Spicer never hit the bottom two until then.

SEE ‘Dancing with the Stars’ is eyeing these celebs for Season 29 — and be warned, political figures are not ruled out

Burke was agnostic about Spicer’s prolonged stay because “Dancing” lets the audience have a say. “It’s a ballroom dancing show; it is not a political show. The contestants came with the spirit of that,” she said. “Ultimately, this is a show in which the audience votes, and the audience voted [to keep Spicer around]. And ultimately, the right person [Hannah Brown] won.”

Burke’s comments and defense of “Dancing” just being a “ballroom dancing show” echo those of Rob Mills, ABC Entertainment’s senior VP of alternative series, specials and late-night programming, who said last month that he still wouldn’t rule out having politicians on Season 29, which will premiere in the fall. However, he admitted he was surprised at how controversial Spicer’s casting was.

“At the end of the day, we’re talking about a ballroom dancing competition — we weren’t asking Sean Spicer to lead a debate or do anything political — but you have to look at the reaction and we saw what people said,” he noted. “I was frankly stunned that people still cared that much about Sean Spicer. I mean, gosh, he had been out of the public eye for about a year. But clearly I was wrong.”