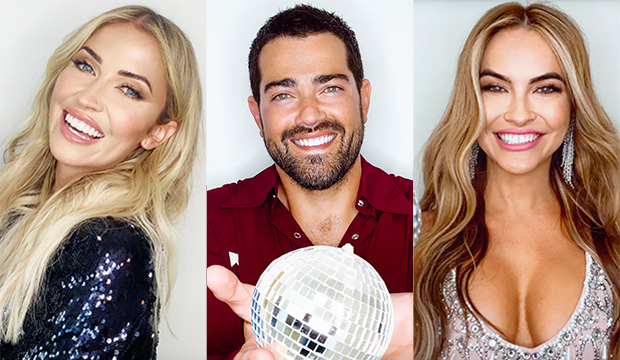 Season 29 obviously won’t be a normal season of “Dancing with the Stars,” thanks to COVID-19. As previously announced, the three married pro couples aren’t allowed to live together while they’re still competing, and there will be no studio audience, of course. But those aren’t the only changes to ensure a safe environment for fancy footworking.

“The challenge for us is that we still want to do what we normally do on the show and bring it back better than ever and evolve it but now we have this whole additional prism to look at it through,” showrunner and executive producer Andrew Llinares told our sister site “Deadline.” “We want to make sure from a COVID point of view that we’re bringing it back safely for everyone in the cast and crew and have a show that we can all get really excited about.”

Here are six major adjustments the show is making in the time of COVID.

1. There’s a new set because the band is gone too
To minimize the number of people in the studio, the band won’t be on this season, which will still air live. As a result, the show has a redesigned set. “What we didn’t want to have in the ballroom was loads of empty seats, we wanted it to look like there was a purpose to it so we’re redesigning the ballroom,” Llinares explained. “We’re going to put in some extra screens, it’s going to look like the show was always designed to look this way.”

2. The judges’ desk is longer
The desk has been widened to allow a distance of eight feet between the judges. The couples also have to maintain an eight-foot distance between themselves and the judges when receiving their critiques and scores. Derek Hough is replacing Len Goodman, who is unable to travel to the United States from his native U.K.

3. The skybox has also gone bye-bye
Well, who didn’t see this coming since that was Erin Andrews‘ home base and Tyra Banks is the new solo host? A lack of a skybox will also enforce social distancing of eight feet between the pairs as they now won’t be on top of each other in a tiny area to watch each other’s dances. “That’s a whole different way for the show to operate behind the scenes because normally the couples hang out together a lot and on camera we won’t have the skybox area where they hang out,” Llinares said. “They’ll still be in the ballroom watching each other but they’ll be eight feet apart.”

4. Backup dancers and giant productions are out the window as well
Again to keep the head count low, backup dancers and huge set pieces are a no-go. This sounds like a loss, but it’s arguably a good thing since it’ll truly be back to basics, and there won’t be any smoke and mirrors to distract from the dance at hand.

5. No camera crews in rehearsals
Instead, the show has gone “Big Brother,” equipping the rehearsal studio with cameras to film the couples’ every move.

6. The couples will be tested for COVID five times a week
That might sound excessive since some other productions are testing every couple of days or once a week, but “Dancing” can’t take any chances since human beings actually have to come in close contact on this show. “It’s amazing how much we’ve learned between March and now and how we can limit exposure so the chances of getting infected are minimal. Each show has been different,” Rob Mills, ABC’s head of alternative programming, said. “With this show, where there is a lot of contact, it’s going to be one of the stricter ones. There’s a lot of close contact compared to game shows, which were the first ones to come back, where it’s very easy to distance every one and have a very small footprint.”