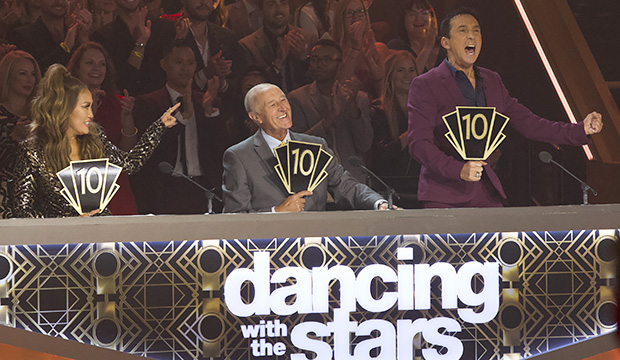 Break out the spray tan because “Dancing with the Stars” has an official premiere date: Season 29 will bow on Monday, Sept. 14 at 8/7c, “Good Morning America” revealed on Tuesday. Yes, that means it’s less than a month away.

“Dancing” is the first show of ABC’s fall lineup to get a premiere date in these COVID-19 times. The pro dancers were also unveiled on “GMA,” with Sharna Burgess, who was surprisingly dropped last year despite being reigning champion, returning (she said last week she’d be “over the moon” if she were asked back). Artem Chigvintsev, who was also axed last year and welcomed his first child with fiancée and former “Dancing” partner Nikki Bella last month, is not back. Keo Motsepe and Daniella Karagach, who did not have partners last season, have been promoted to the pro lineup. Karagach, who’s married to two-time pro Pasha Pashkov, and former troupe member Britt Stewart are the new female pros, filling the vacated spots of Lindsay Arnold and Witney Carson, both of whom are pregnant. Stewart is the first full-time Black female pro.

Here are the pros:

Because of COVID-19, the three married couples — Karagach and Pashkov, Chmerkovskiy and Johnson, Farber and Slater — cannot live together during the season, “GMA” revealed.

The celebrity cast will be announced at a later date; thus far, former Bachelorette Kaitlyn Bristowe has been the only confirmed contestant. But even after the stars are revealed, the show will once again keep the partnerships under wraps until the premiere.

“Dancing” will also share production details at a later date, which will no doubt include safety protocols. Last month, two-time champ Murgatroyd shared that she’s been told the cast will be tested for COVID-19, undergo daily temperature checks, quarantine, and will not travel during the week. “We’re going to be temperature-checked every day. We’re going to get COVID tests maybe every two days or something like that, so it’s going to be pretty strict,” she told “Us Weekly.” “They’re expecting us to do some sort of quarantine, not go to Vegas on a trip, not do the regular things that we might normally do. I think that it’s going to be OK.”

Of course, “Dancing” is going to be different regardless with Tyra Banks replacing Tom Bergeron and Erin Andrews as host. ABC promises a “fresh take” on the long-running show with this switch-up. The judges, Carrie Ann Inaba, Len Goodman and Bruno Tonioli, are expected to return.