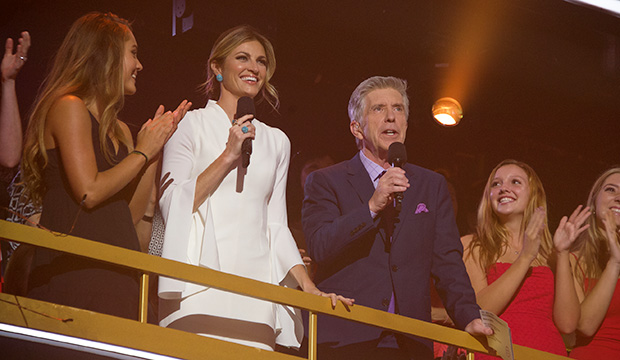 Don’t stock up on spray tan just yet. While the ideal plan is for “Dancing with the Stars” Season 29 to air in the fall, Tom Bergeron has warned fans that the entire game plan for the show’s return is “still being discussed” in a COVID-19 world.

In the comments of the host’s Throwback Thursday Instagram post, a fan asked if “Dancing” was coming back in the fall. Bergeron responded, “ABC has renewed the show for a Season 29 but when (& how) still being discussed as far as I know (which, admittedly, is not much).”

Bergeron said earlier this month that “the hope” was for Season 29 to air in the fall, but acknowledged that the very nature of the show would make it difficult to do so during a pandemic. “It’s hard to imagine right now a scenario where 700 people in an audience and 24 sweaty dancers can all be in the same room,” he said. Last month, pros Cheryl Burke and Sharna Burgess shared that the plan was to move forward with a fall season as far as they knew at the time. Burke also proposed a virtual season if we’re still in quarantine then. 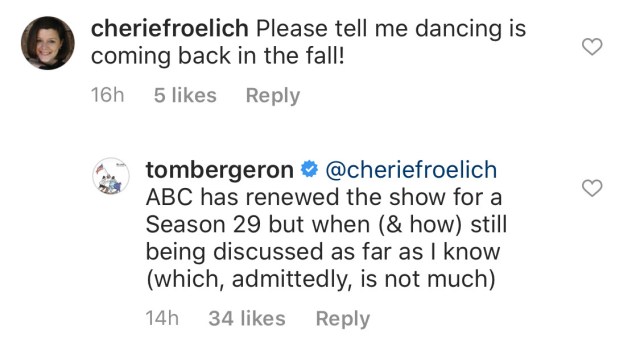 If “Dancing” doesn’t return at all in 2020, it would be the first time the series has skipped a calendar year since it premiered in 2005. Last year, it was reduced to one season a year after having aired in the spring and the fall since March 2007.

ABC formally renewed the show for a 29th season last week, but did not announce a fall schedule, which will come at a later date. A big wrinkle (besides, you know, coronavirus): “The Bachelorette” is hoping to film in the summer for a fall premiere. “Dancing” and the “Bachelor” franchise split Monday nights throughout the year, so only one would be able to keep its timeslot if both are able to film.

“The big question is who knows when scripted will be back, so there might be a need for ‘Bachelorette’ and ‘DWTS’ to co-exist at the same time,” Rob Mills, ABC’s head of alternative programming, said earlier this month. “I think we will look at every different scenario, but clearly, we love ‘Dancing’ and we love ‘Bachelorette,’ and to be able to have them both on at the same time is a high-class problem.”