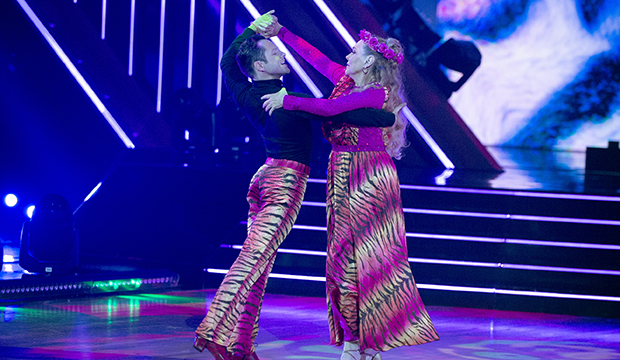 Did we call it or did we call it? Carole Baskin will hit the floor for her second dance on “Dancing with the Stars” to yet another kitty-themed song: “What’s New Pussycat” by Tom Jones. TPTB can’t stop, won’t stop.

The “Tiger King” star and Pasha Pashkov have the Viennese waltz, which might be slow enough to help them improve on their score of 11 for their paso doble on the premiere. The Viennese waltz is one of seven dances on deck for Week 2 — foxtrot, samba, tango, rumba, cha-cha and jive being the others.

Busting out the tough samba and rumba this early feels wrong, but Skai Jackson has the former and Justina Machado has the latter. They topped the leaderboard Week 1, each with a 21, and all signs so far point to them being able to handle whatever Alan Bersten and Sasha Farber, respectively, throw at them. Chrishell Stause also has the rumba, which may be more cruel since she didn’t have a great debut routine, and the rumba requires lots of hip action.

SEE Yes, ‘Dancing with the Stars’ is airing on Tuesday — here’s why

Here are the dances:

Monica Aldama and Val Chmerkovskiy: jive (“Shake It Off” by Taylor Swift)

Justina Machado and Sasha Farber: rumba (“When You Believe” by Whitney Houston and Mariah Carey)

AJ McLean and Cheryl Burke: foxtrot (“Ain’t That a Kick in the Head” by Dean Martin)

Charles Oakley and Emma Slater: cha-cha (“Never Too Much” by Luther Vandross)

Chrishell Stause and Gleb Savchenko: rumba (“This Is Me” by Keala Settle and “The Greatest Showman” ensemble)

“Dancing” is airing on Tuesday this week only, as “Monday Night Football” will take over its usual slot to mark the 50th anniversary of the first “MNF” game. Week 2 will also see the first live votes and elimination of the season. Fans from across the country can vote for their favorites while the show is airing in the Eastern and Central time zones. The votes will be combined with scores from both weeks to determine the elimination.

Tuesday’s show will also include, per ABC, a “comedic cold open” in which Tyra Banks teaches the cast her signature “smize.” This will end well.