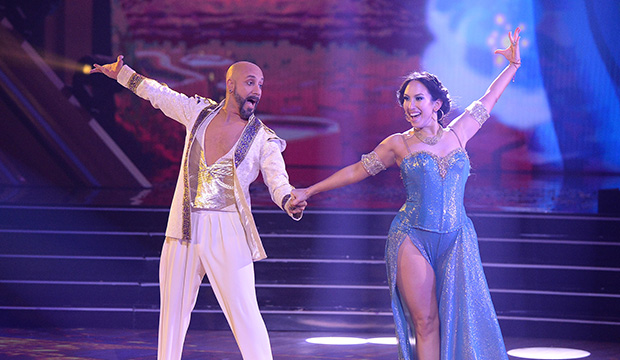 With Carole Baskin gone, we will have our first cat-free week on “Dancing with the Stars” (no offense to cats; the feline theme was just getting tiring). Week 4 doesn’t have a theme, but it ought to make every Backstreet Boys fan happy.

Three weeks after Nelly got to perform to his own song, AJ McLean will cha-cha to BSB’s fan anthem “Larger Than Life.” Petition for him to wear this crop top again. We want it that way. But that’s not all because the entire group will be part of the performance “in a very COVID-safe way,” showrunner and executive producer Andrew Llinares revealed last week during a virtual panel. “I think it’s going to be done remotely on the screens, but that’s super exciting.”

No new dance will be introduced this week, but Kaitlyn Bristowe got another slow one, the Viennese waltz (though she will have to wear shoes this time), so that’s good for her ankle, while Justina Machado has the salsa, which ought to be right up her alley.

Here are the Week 4 dances:

Monica Aldama and Val Chmerkovskiy: samba (“Party in the USA” by Miley Cyrus)

Nelly and Daniella Karagach: paso doble (“All I Do Is Win” by DJ Khalid)

Nev Schulman and Jenna Johnson: rumba (“Because You Loved Me” by Celine Dion)

The show will open with a “comedic PSA” and will also feature Jackson paying tribute to her “Jessie” co-star Cameron Boyce, who died in July 2019 at 20 of an epileptic seizure. One couple will be eliminated at the end of the night. Most of the remaining couples have been scoring the same point range, outside of Heche last week, so it’ll be interesting to see who ends up in the bottom two.