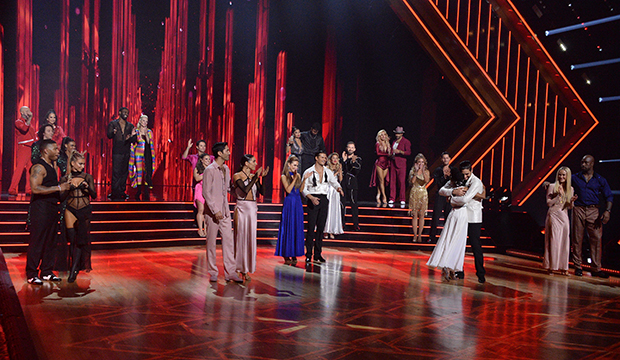 Break out the leg warmers because it’s ’80s Night on “Dancing with the Stars” and there’ll be a lot of… tangos?

Four of the top 12 couples are tasked with tangos this week, so prepare for lots of side steps. Kaitlyn Bristowe is one of the four, which is a good thing since, like Derek Hough pointed out last week, it’s been getting too same-y with her pretty but similar lyrical routines the past couple of weeks.

Two dances will make their season debuts: jazz, which is assigned to three couples, and contemporary, which Johnny Weir got. And if you’ve seen any of his figure skating routines, you know he will nail this (to be fair, it’s hard to eff up contemporary). Also, it’s to “Total Eclipse of the Heart,” so this is going to be a moment.

Here are the Week 5 dances:

Vernon Davis and Peta Murgatroyd: tango to (“Livin’ On a Prayer” by Bon Jovi)

Skai Jackson and Alan Bersten: jazz (“The Power of Love” by Huey Lewis and the News)

Jeannie Mai and Brandon Armstrong: jazz (“Like a Virgin” by Madonna)

Jesse Metcalfe and Sharna Burgess: tango (“Everybody Wants to Rule the World” by Tears for Fears)

Nelly and Daniella Karagach: samba (“Rhythm of the Night” by DeBarge)

Nev Schulman and Jenna Johnson: quickstep (“Take on Me” by A-ha)

Chrishell Stause and Gleb Savchenko: cha-cha (“You Got It [The Right Stuff]” by New Kids on the Block)

Per ABC, the show will kick off with a cold open of Tyra Banks “walking into the ballroom to Whitney Houston’s ‘How Will I Know.'” Such an important detail.

This is one of two theme nights for October, the other being Villains Night on Oct. 26 in lieu of the traditional Halloween Night. The show plans to do theme nights every other week this season.