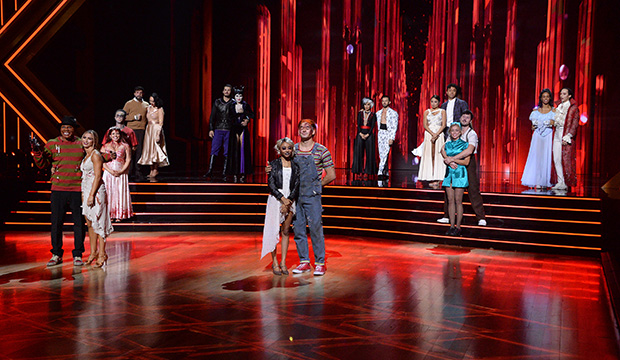 [UPDATE Nov. 2: Jeannie Mai has withdrawn from “Dancing with the Stars” after being hospitalized over the weekend, so there will now only be one elimination.]

A double elimination means double the dances on “Dancing with the Stars” — but it’s not two whole routines. In addition to their individual numbers, the top nine couples will face off in relays on Monday.

The nine pairs will be split into three relay groups — cha-cha, samba or Viennese waltz — and each couple will perform one at a time during their respective relays. One judge will be assigned to each group and will rank the couples within that group for bonus points. The points will be added to their individual scores and the live votes for the double elimination.

“Dancing” hasn’t done relays in a hot minute, but now’s a good time as any to bring it back since it can’t do team dances because of COVID-19 precautions.

Here are the individual Week 8 routines:

AJ McLean and Cheryl Burke: rumba (“Way Down We Go” by KALEO)

Nelly and Daniella Karagach: rumba (“Nobody Knows” by The Tony Rich Project)

Nev Schulman and Jenna Johnson: Viennese waltz (“Stuck with U” by Ariana Grande and Justin Bieber)

Here are the relay groups:

Since this episode is airing on Election Day eve, it will open with with a sketch encouraging viewers to rock the vote “as part of a nonpartisan initiative,” ABC specifies. And most importantly, Tyra Banks will make her entrance to Bruno Mars‘ “Treasure.”