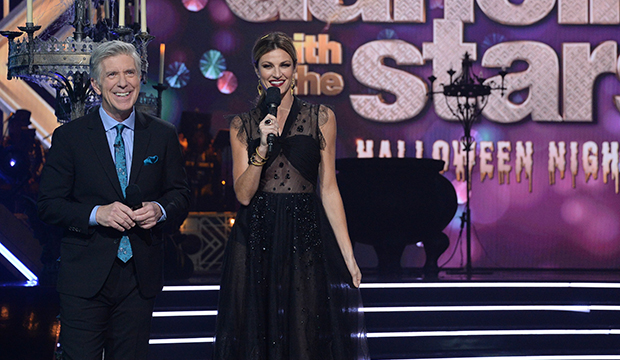 “Dancing with the Stars” was formally renewed for an expected 29th season on Thursday, but ABC did not announce a fall schedule — also expected given the unpredictable state of the world. But you can probably count on lacing up your dancing shoes again in the fall if things go well.

“I think that’s the hope,” Tom Bergeron told “Extra” when asked if the show will return in the fall prior to the renewal (watch below). “It’s hard to imagine right now a scenario where 700 people in an audience and 24 sweaty dancers can all be in the same room. We’ll see if some sort of variation of that is concocted.”

Though the official pickup didn’t come until Thursday, a 29th season had been discussed publicly by ABC brass, including a celebrity wish list, and pros since December, but COVID-19 has since made everything very murky. Last month, pros Cheryl Burke and Sharna Burgess revealed that the plan was to go forward with a fall season as far as they knew. Burke was all for doing a virtual season if social distancing protocols are still in place then.

“I think there is a creative way of doing things. Everyone is really into taking 15-minute classes. If [the show can’t return], we’ve gotta do [it virtually],” she said. “We’ve got to do it like this. At the end of the day, I can teach [my husband] Matt [Lawrence] how to dance. I think it’d be really cool to teach your loved one at home how to dance. It could be a different type of experience, but I think we kind of have to go with the flow when it comes to changing.”

Season 19 champ Alfonso Ribeiro recently suggested that “Dancing” take a page out of “American Idol’s” book with live-to-tape virtual performances. “It wouldn’t be the same, but ‘American Idol’ has shown how it can be done,” he said. “It’s more entertaining with a live audience but there’s no way to replicate that. I think 99 percent of the audience is people watching from home. I believe we’ll return to some sense of normalcy in the fall.”

ABC will announce its fall schedule at a later date, but there’s also another factor to consider: “The Bachelorette” is hoping to film in the summer for a fall premiere. “Dancing” and the “Bachelor” franchise split Monday nights throughout the year, so something will have to give if both are able to return in the fall. “The big question is who knows when scripted will be back, so there might be a need for ‘Bachelorette’ and ‘DWTS’ to co-exist at the same time,” Mills said earlier this month. “I think we will look at every different scenario, but clearly, we love ‘Dancing’ and we love ‘Bachelorette,’ and to be able to have them both on at the same time is a high-class problem.”