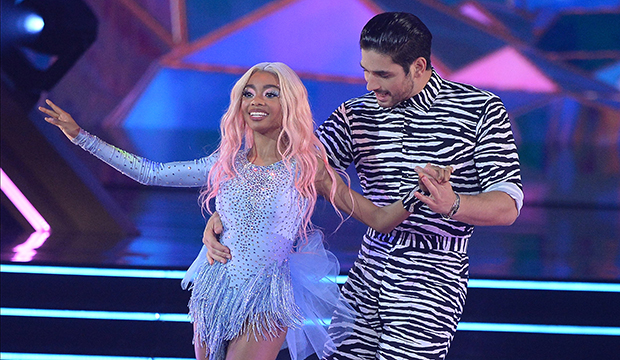 For the second time this season, Skai Jackson flubbed one of her routines on “Dancing with the Stars.” The Disney Channel star lost her balance during her cha-cha with Alan Bersten on Monday on a step on which she had been focusing.

“It was honestly just a step that I worked really hard [on] and it was really hard for me to get into that next move. That’s what I personally messed up on,” Jackson told “Entertainment Tonight.” “And then from there, I just kind of blanked out and I was like, ‘What the heck is going on?’ But you know what, my motivation was like, ‘You’re going to get through this dance. Keep pushing.'”

The judges commended the 18-year-old for recovering from the mishap and soldiering on, but they understandably docked her, giving her straight 6s for a total of 18, the lowest score of the night. “I was really happy that the judges did say that, because I really worked hard,” Jackson said of their comments. “I was like, ‘You know what? Just keep going.’ I’m glad that they acknowledged that.”

The actress similarly bungled her samba in Week 2, nabbing a 15, the lowest score of that night. In both cases, she avoided the bottom two thanks to fan votes. Last time, she rebounded the following week with her jive, and Bersten vows to do the same next week on Villains Night.

“We’re not going to change anything. We’re just going to work harder. We’re going to get better. We’re going to be on top next week. … What’s impressive is coming back strong,” he declared, adding that he’s inspired by Jackson’s resilience. “It motivates me and encourages me that Skai is so resilient and so determined, that she wants this so bad, that she doesn’t give up. You don’t wish for this, but the way Skai handles it is such a positive outlook. It shows that she’s not going to give up. Little things can’t keep you down. You’ve gotta keep fighting for what you want. Clearly Skai wants to be here and it shows every time she goes on that floor. And it makes me so happy.”