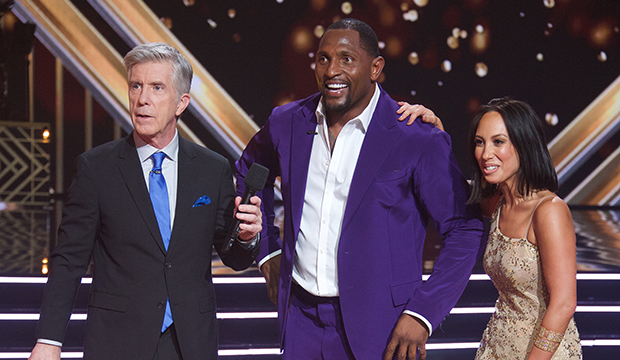 Fans might still be reeling from “Dancing with the Stars” firing Tom Bergeron, but he is doing just fine, thank you very much. After Witney Carson said that Bergeron has been “in good spirits,” Cheryl Burke has attested to his “glass half-full” outlook.

“You know, he’s great. I mean, he’s got such a great attitude,” the two-time winner told “Us Weekly.” “He’s super positive about, about it all.”

If you follow Bergeron on social media, you can see he’s taken it all in stride after he and Erin Andrews were dropped as hosts last month. He joked about being replaced by Tyra Banks shortly after she was announced as the new host and executive producer. He picked up an “enlightening” tabloid recently. His Twitter bio now reads “Former Co-Host of “Footwork With the Famous.” And he reflected on his career while thanking fans for their support and comments.

Burke, who calls the Emmy winner her “dance dad,” goes way back with the original host, as she joined the show in Season 2 in 2006. Bergeron also attended her wedding to Matthew Lawrence last year.

“I never thought that that was going to happen. I know that Tom will be a part of my family [forever],” she said. “Tom taught me a lot and has mentored me kind of throughout my career. So as far as friendship and connection and consistently communicating, that’s always going to happen with us.”

As for Banks, Burke thinks the former “America’s Next Top Model” host “is going to be great.”  “She is so full of energy and she’s already, like, she’s got that whole head whip thing ready to go,” she explained. “She’s so full of personality.”