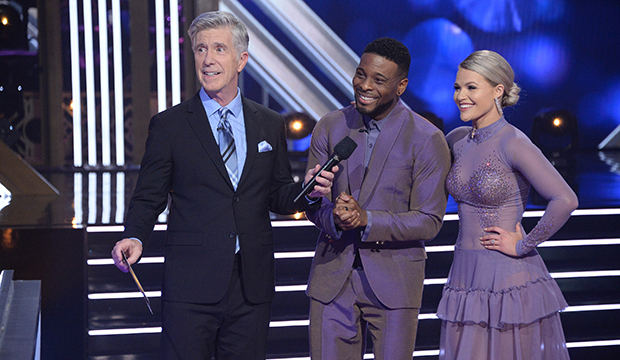 Add Witney Carson — and her husband Carson McAllister — to the long list of people who were shocked that “Dancing with the Stars” axed Tom Bergeron and Erin Andrews as hosts.

“Nobody saw that coming,” Carson told “Entertainment Tonight” in an interview with McAllister, with whom she’s expecting their first child (watch below).

As fellow pro Peta Murgatroyd revealed last month, the pros were given a heads-up about the major change before the news broke. An original host, Bergeron is departing after 15 years. Andrews joined as co-host in Season 18 in 2014 — which was also Carson’s first season as a pro — after finishing in third place on Season 10 in 2010.

“I’ve known the show just as Tom. I mean, I’ve [correlated] the ‘Dancing with the Stars’ show with Tom, so for him not to be there definitely is a huge change,” Carson said, adding that she texted Bergeron afterward. “I just gave him my love and let him know that he’ll be missed. Tom and I, we’re really close. We always talk — every time after we perform on stage and he’s always there to kind of give us some good advice. He’s like a brother or like an uncle to me. Obviously we’re sad to see him go, but he was really in good spirits.”

Tyra Banks was announced as the new host and executive producer the next day, which was an even bigger curveball for fans and the pros alike. “When we heard Tyra Banks, [McAllister and I] both looked at each other like, ‘Wow! OK. I like this,'” Carson shared.

A fan of “America’s Next Top Model,” the Season 19 champ is excited to see Banks as host, but knows that it will be a big adjustment for longtime fans. “I think she’s going to be amazing, but it definitely will be very different,” she said. “But I think change is good sometimes, and I think that Tyra is going to be great. Obviously we’ve seen her on ‘America’s Next Top Model,’ so we’ll see if it can kind of flow, but I think it will.”

Another big change for Season 29 — besides, you know, how the coronavirus pandemic will impact production — is that Carson won’t be on for the first time since she became a pro. The 26-year-old is due in January and joins her BFF and expectant mom Lindsay Arnold, who’s due in November, on the sideline this season.

“I think it’ll be a really drastic change. I mean, it’s been a part of my life ever since I graduated high school. So when I was 18, that’s all I’ve known. I’ve done it every single year since,” Carson noted. “I’m definitely going to have some serious FOMO. I told [co-executive producer] Deena Katz yesterday, I was like, ‘I don’t know how I’m gonna do it without ‘Dancing.’ I’m gonna have serious FOMO.’ But Carson will be happy because he won’t have to fly back and forth [from Salt Lake City to Los Angeles] all the time!”

Plus, now she can just enjoy the show as a viewer. “I’ve never done that before, so I’m really excited to cheer on all my castmates and my friends and just see how the show is,” she continued. “It’s gonna be great.”