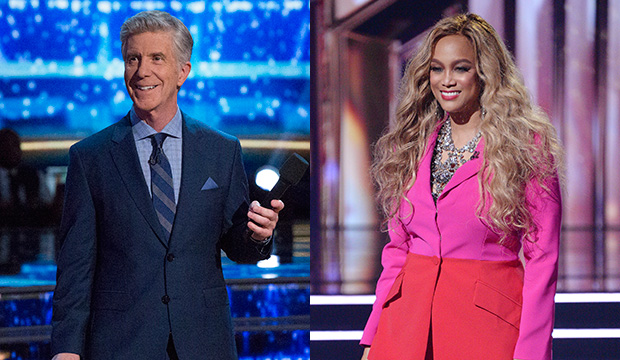 Needless to say, “Dancing with the Stars” fans are not happy that Tyra Banks replaced Tom Bergeron and Erin Andrews as host, but he has nothing against the supermodel — and he’s definitely not going to rage out about it, even if he’s in a literal position to do so.

On Sunday, Bergeron shared on Instagram a photo and video of him at Rage Ground, a rage room where he destroyed a bunch of “s#i+” to take out his 2020 frustrations (yes, it’s the same rage room Alan Bersten took Hannah Brown to last season to prepare for the paso doble).

“When the gym is closed…and the hiking trails are closed…and Mitch McConnell becomes the Guinness Book Poster Boy for hypocrites…it’s time to smash s#i+!! 😏” Bergeron captioned the post.

In the comments, one fan wrote, “Can you throw some bottles at a Tyra Banks poster?”

Bergeron, ever the class act, was not going to be baited. “Nope. Nothing against Tyra. I teased the mirror lip poster, but that was having a laugh at the marketing, not personal,” he wrote, referring to his tweet earlier this month poking fun at the promo poster in which Banks’ lips resemble a Mirrorball trophy. 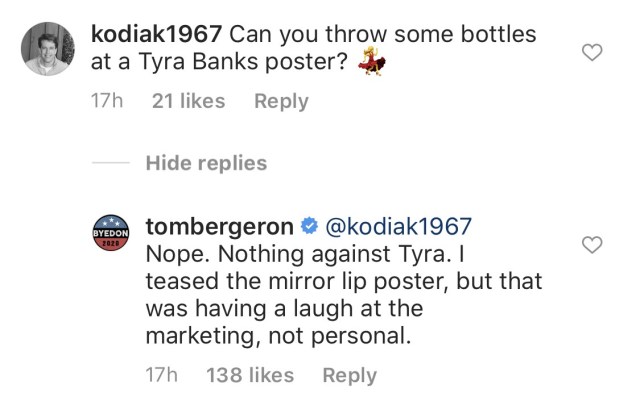 Fans appreciated him taking the high road. “And [that’s] what makes you a Class Act Tom,” one wrote. Still TBD: If viewers will stop coming for her after his comment.

SEE Reminder: ‘Dancing with the Stars’ is airing on Tuesday this week

Bergeron and Andrews were fired from their longtime gigs in July as part of a creative revamp for “Dancing.” Bergeron had not commented directly on Banks’ hiring until now, but has made some cheeky jokes, including one that had Banks herself in awe. Banks said earlier this month that she has not spoken to Bergeron yet and knows it will be a “challenge” to fill the shoes of OG host Bergeron especially.

“They lead the show. This is one of the top-rated shows in the world,” she said. “So me respecting the stage that they have set and then adding my icing to that, I feel confident about that. But of course, it’s a challenge, but I don’t back away from challenges.”