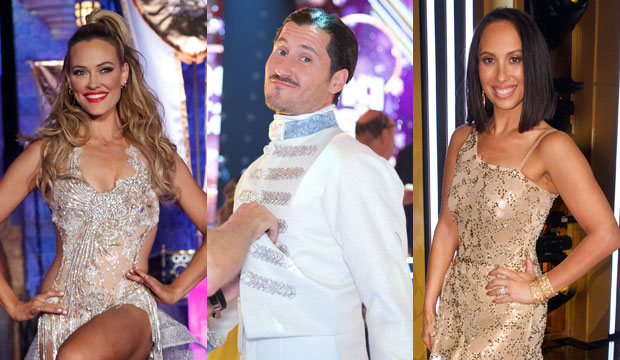 No one has won more Mirror Ball Trophies on “Dancing with the Stars” than six-time champ Derek Hough, but there are several pro dancers tied for second place with two victories apiece. And three of those pros will be in the ballroom this fall for the show’s 29th season. As of this writing we don’t know the celebs they’ll be dancing with, but which of them would you most like to see holding a third trophy: Cheryl Burke, Val Chmerkovskiy or Peta Murgatroyd? Scroll down to vote in our poll.

SEESharna Burgess is ‘grateful,’ ‘excited’ to return to ‘Dancing with the Stars’ after getting cut last year

Burke was actually the first two-time winner ever on the show. She prevailed in her first two attempts: in season two with singer Drew Lachey and season three with football player Emmitt Smith. Alas she hasn’t made it back to the winner’s circle since then, though not for a lack of trying. She has competed in 22 seasons of the show, and made the finals with Cristian de la Fuente (season six), Gilles Marini (season eight), Rob Kardashian (season 13), William Levy (season 14) and most recently Jack Osbourne (season 17).

It also didn’t take Murgatroyd long to prevail. She won on her second try, claiming the Mirror Ball Trophy with football star Donald Driver in season 14. Then she won again in season 22 with model Nyle DiMarco, who made history as the first deaf contestant to win the show, which was also a testament to Murgatroyd as his teacher. But those were her only two times in the top three.

SEE‘Dancing with the Stars’ pros for season 29: These 14 professional dancers will compete for the Mirror Ball Trophy

It took longer for Chmerkovskiy to reach the summit. He didn’t win the Mirror Ball until his eighth try. He prevailed with actress/singer Rumer Willis in season 20, and again with gymnast Laurie Hernandez in season 23. Overall he has made the top three seven times out of his 15 past seasons, which means there’s almost a 50/50 chance that he’ll make the finals whenever he’s in the cast. A lot, of course, depends on who he’s dancing with.

The other three pros who are tied with two trophies apiece aren’t competing on the show this season: Kym Herjavek, Julianne Hough and Mark Ballas. So it’s up to Burke, Chmerkovskiy and Murgatroyd to finally become the only pro besides Hough to win the show more than twice. Which one deserves another moment in the spotlight?