“I think it’ll probably come down to Nev or I wouldn’t be surprised about Nelly. After Bobby Bones, anything is possible,” said Gold Derby contributor Cordell Martin, anticipating tonight’s “Dancing with the Stars” finale in which Nev Schulman and Nelly go up against Justina Machado and Kaitlyn Bristowe for the Mirror Ball Trophy. Watch my entire discussion with Martin and Jeffrey Kare above.

“I’m currently predicting [Schulman] to win right now,” said Kare. And I think he’s the favorite too since he has the highest cumulative judges’ scores of the season and seems to have a strong fan base as evidenced by the fact that he never landed in the bottom two all season when viewer votes have been added in. He would undoubtedly be a worthy Mirror Ball champion, but Martin is ” hoping by some miracle that Justina wins. She’s been my favorite since week one.”

I agreed with that sentiment, explaining that “we stan Justina Machado here, unapologetically.” She was the front-runner in our odds for most of the season, in fact, but landing in the bottom three at the end of Semi-Finals night suggested that her audience support might not be as strong as the other three finalists. Nevertheless, we’re mostly happy with the final four contenders we’ve got, even if we wouldn’t have necessarily chosen all of them.

SEE‘Dancing with the Stars’ flashback: The top 4 we predicted at the start of the season were ALL WRONG

“For the most part, I think the fans definitely voted with who were the best dancers — except for Nelly, but I’d rather take one so-so dancer than three or four,” Martin admits. That echoes what our readers thought when we asked them who really should have been eliminated at the end of Semi-Finals: an overwhelming 64% said it should’ve been Nelly (see those complete poll results below).

But Nelly had so much fan support that he wasn’t even in jeopardy, which is why we wonder if he might be the next Bobby Bones, turning last-place scores into a Mirror Ball Trophy through his sheer charisma with the viewing audience. Could the hip-hop legend pull off another of the biggest upsets in the show’s history? 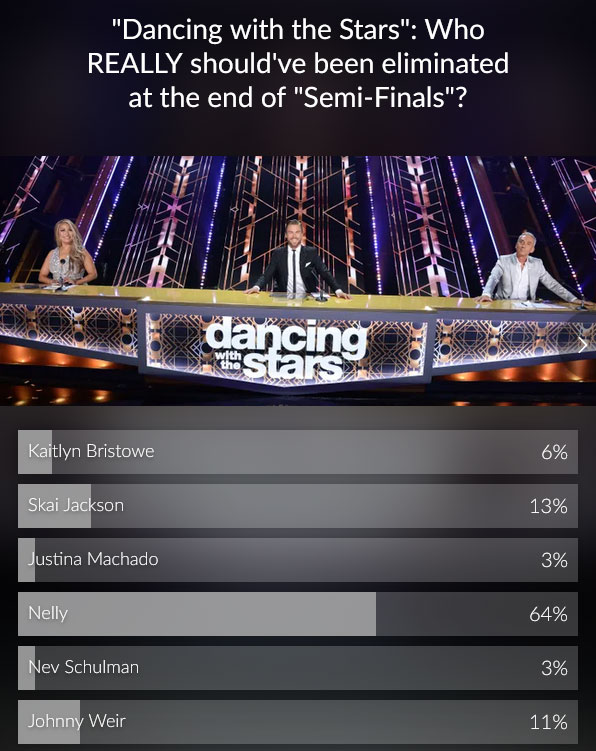