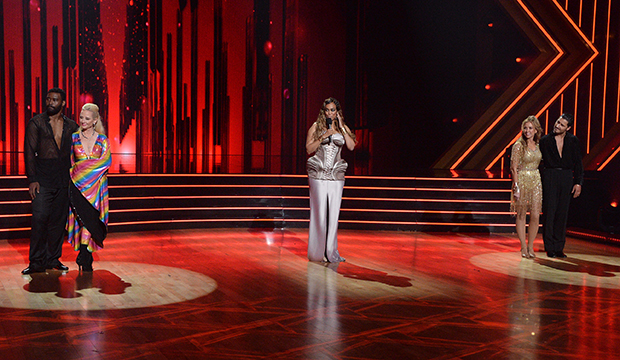 “Dancing with the Stars” hasn’t had any shocking eliminations in Season 29 yet, but Monday’s results were certainly shocking in how they unfolded, culminating with the embarrassing faux pas of Monica Aldama and Val Chmerkovskiy being declared safe when they were actually in the bottom two. So how did this mix-up happen?

“I’ve been told that there was a technical difficulty,” Tyra Banks told “Good Morning America.” “But, you know, we power through. It’s really unfortunate that certain people thought they were safe and they weren’t and had to get called back.”

Bruno Tonioli has a simple theory: human error. “We don’t actually know yet, but the votes, there’s such a small margin between them. So somebody must have by mistake pressed the wrong button and put them in the wrong order,” he told “Entertainment Tonight.”

He added: “Well, it’s live television, things like this happen, especially with information coming in from all over the country, voting and calculating in such a small amount of time. Listen, the computer technology, not a clue. I always say, ‘Piece of paper! Write it down!'”

Banks initially announced Aldama and Chmerkovskiy as safe, and they shuffled the stage, but things went off the rails when Banks said the bottom two were Anne Heche and Keo Motsepe, and Vernon Davis and Peta Murgatroyd, who were still on the stage with Chrishell Stause and Gleb Savchenko. When Banks realized there were still three couples left, she was told there was an “error in the control room” and asked for Aldama and Chmerkovskiy to return as they were actually in the bottom two with Heche and Motsepe, whom the judges ultimately sent home.

Banks apologized profusely, explaining she was “reading my cards, but my cards were wrong.” “This is live TV, right? This is the craziness of live TV,” she said.

“Tyra was brilliant because she just said, ‘Oh no, wait a second here, this is not working. What I have doesn’t match what I’m getting [fed in].’ She was brilliant, because what she getting in the ear was different than what was printed out,” Tonioli said of Banks’ recovery. “She was really good because she took control of the situation.”

Tonioli and his fellow judges Carrie Ann Inaba and Derek Hough were equally confused because they do not wear earpieces. “I don’t have an earpiece, so I’m just looking and waiting to see what happens,” he explained. “And she really kind of managed to bring the whole thing together. So good for you, girl. That’s how you do it!”

Despite the awkwardness, at least they didn’t go full “La La Land”/”Moonlight” or Steve Harvey and eliminate a couple who wasn’t even in the bottom two. Aldama and Chermkovskiy, who got a 24 for their samba, are taking it all in stride.

“I’m just thinking 2020, you know?” Chmerkovskiy quipped. “It was crazy, it was shocking. To be honest, we still don’t know. We just came off the stage so I don’t have an answer for you. As Tyra said, it’s live TV. What you see is what you get, but I’m glad we get to laugh about it now.”

The two-time champ does “hate” that it happened “because now it feels like, ‘Anne goes home because of Monica and Val,'” he explained. “I hate that because we love Anne. “We’re such huge fans of Anne and I didn’t even get to, like, be upset over the fact that Anne is leaving because it was such a crazy [moment]. But we love Anne and that’s the only negative about this situation. Obviously the positive is that we get to compete for another week and we’re very excited about that.”

Aldama added that it felt they went from “zero to 100, back down to zero really fast,” but she’s grateful the judges unanimously chose to keep her over Heche, who received a 21 for her paso doble. “I feel great that they all chose to save me and Val because it means that they have faith that I can get better every week,” she said. “Hopefully that’s what we’ll do … and get more votes.”