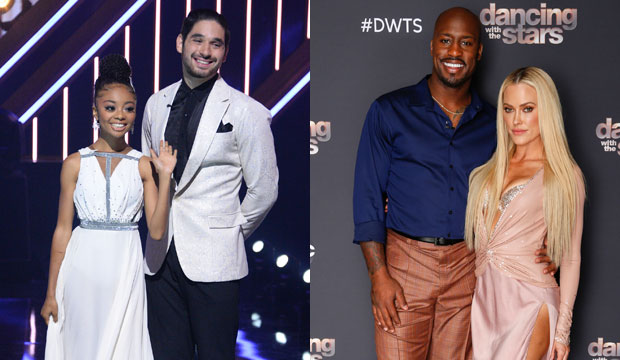 I added up the YouTube views for the first three weeks of dances on “Dancing with the Stars,” and two of the bottom three celebs on the online video platform ended up as the bottom two when judges scores and viewer votes were combined on “Top 13” night (Monica Aldama and Anne Heche, with Heche being eliminated). Does that mean YouTube views are a good proxy for audience enthusiasm? Maybe, maybe not, but it’s worth considering the week-four numbers as we head into “80s Night” on October 12, since half of the show’s results are determined by viewer votes.

As of the evening of October 8 (with numbers going up by the hour), Skai Jackson continues to be the most popular celeb on the show with almost half a million views on YouTube. And this week her fans had an even bigger reason to check her out: her emotional foxtrot in honor of her late “Jessie” co-star Cameron Boyce was the highest scoring of the night and even received the first perfect 10 of the season from judge Carrie Ann Inaba. Predictably, she was safe when viewer votes were added in.

Backstreet Boys singer AJ McLean is next with a quarter million views, undoubtedly helped by the fact that his cha cha was accompanied by his fellow Backstreet Boys singing their hit “Larger Than Life.” McLean has yet to top the judges’ leaderboard, but his consistently solid scores and boy band backers will probably keep him safe for a while.

SEEAnne Heche opened up about Ellen DeGeneres on ‘Dancing with the Stars,’ then performed this defiant paso doble [WATCH]

The bottom of the leaderboard is another story. Football player Vernon Davis is the only celeb under 100,000 views as of this writing. Tyra Banks mistakenly announced him as one of the bottom two celebrities in week four when he wasn’t, but perhaps he might trail with fan voters in the coming weeks. However, NFL stars have had an incredibly strong track record in seasons past, so we mustn’t count him out. “One Day at a Time” actress Justina Machado may not be entirely safe either despite her consistently strong scores. But her effervescent personality may win her additional fans as the season progresses.

All that said, these aren’t the dances fans will be voting on. Instead, fans will be considering the upcoming “80s Night” routines when they’re casting their votes live during Monday night’s show. But do you think these viewership numbers are good news for Jackson and bad news for Davis?

'Hell's Kitchen' season 19 episode 7 recap: Who was eliminated in 'A Pair Of Aces'? [UPDATING LIVE…

Mackenzie Ziegler ('The Masked Dancer' Tulip) unmasked interview: 'Behind the mask I could be whoever I…

Andra Day, Leslie Odom Jr. and Sacha Baron Cohen have multiple Golden Globe noms: Will voters make sure they all win one?

Mads Mikkelsen (‘Another Round’): ‘This story was about embracing life’ when it feels like it’s passing you by

Janelle Monae went ‘All In,’ and now she could win her 1st Oscar before her 1st Grammy
Must Read
Show Articles