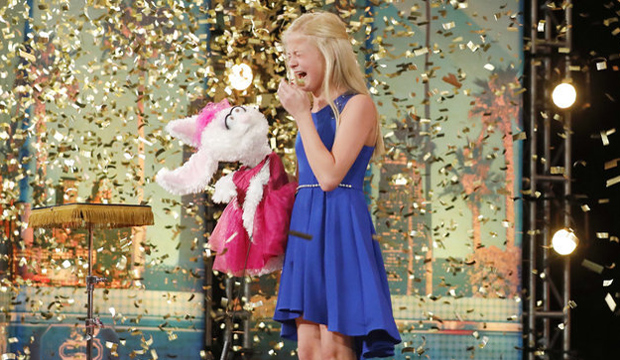 NBC’s long-running reality TV show “America’s Got Talent” has had its fair share of successful winners over the years. But none has struck a chord with viewers more than ventriloquist Darci Lynne Farmer. This talented tyke from Season 12 has become one of the most viral acts ever, with her original 2017 audition racking up more than 350,000,000 views. In our recent poll asking fans to name their favorite “AGT” winner of all time, Darci Lynne unsurprisingly topped the list at 38%. Only three other champs came in with double-digit support: close-up magician Shin Lim in second place at 18%, singer/ukuleleist Grace VanderWaal in third place at 12% and singer/pianist Kodi Lee in fourth place at 10%.

Here are the complete poll results:

Since winning “AGT” in 2017, Darci Lynne has had a successful career that includes television specials, a nationwide concert tour and a spot on “America’s Got Talent: The Champions.” NBC’s spin-off series pits acts from all corners of the planet against each other for ultimate bragging rights as the world’s best act, with Darci Lynne coming in second place to Shin Lim during the inaugural 2019 cycle.

“I thought she was gonna win!” Shin told me about Darci Lynne after his victory on “AGT: The Champions.” Even though Darci Lynne was eliminated early from the competition, the judges brought her back as a wild card and she sailed all the way to the top two based on her expert ventriloquism skills. Shin added that Darci Lynne’s finale performance, in which she sang opera with puppet Petunia, was “mind-blowing.”

'America's Got Talent': 15 most viewed 'AGT' auditions of all time