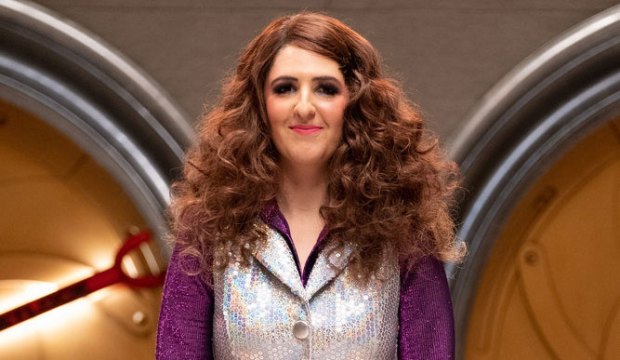 D’Arcy Carden received her career-first Emmy nomination for the final season of “The Good Place.” She competes in the Best Comedy Supporting Actress race and has submitted to Emmy voters the episode “You’ve Changed, Man” for consideration.

In the afterlife laffer she plays Janet, the cheerful robotic assistant who has been rebooted around 800 times. Over the course of the series, the role allowed her to also play a devilish Bad Place version of Janet, and in the final season we were also introduced to an expressionless “Neutral Janet.” In her submitted episode she gets to play this full range of Janets as the Judge (Maya Rudolph) visits the voids of the different Janets searching for a switch the cancel the earth, during which time we see the unique traits of each of her personae.

The Judge is accompanied by regular Janet, who is trying to convince her that the Earth is worth saving. A final pitch by the entire cast of main characters is made in the void of regular Janet, and to help keep the Judge’s attention, Janet manifests Timothy Olyphant. The group’s pitch culminates in a brief, poignant speech by Janet, who expresses that “getting rebooted over and over made me a better not-a-person than I’ve ever been. Humans should get the same opportunity.”

Getting to play multiple roles has proven successful with Emmy voters. It helped Toni Colette win Best Comedy Actress in 2009 for her multiple personalities in “United States of Tara.” John Lithgow submitted a dual-performance episode for his 1997 Emmy win for “3rd Rock from the Sun.” More recently, in Carden’s category, this played a factor in Kate McKinnon’s back-to-back wins for playing various characters on the sketch comedy “Saturday Night Live.” Multiple roles show range and make a strong impact all in one submission. And in this episode, Carden gets to play four different versions of Janet, who are all funny in their own ways.

It’s a funny performance, but with a little heart at the end. This means she is likable and empathetic while providing the laughs. That’s also helpful at the Emmys.

Janet has become a fan-favorite character. There is an iconic quality to this not-a-girl/not-a-person afterlife assistant that makes her stand out from the other nominees in this race.

This is the last chance to reward this role at the Emmys as it was the series’s final season. It scored six Emmy nominations, including a bid for Best Comedy Series. That’s the most the show has ever received, so it’s going out on a high according to voters.

Carden does not have a whole lot of screen time in the episode, as she is absent from one of the two dominant storylines in the episode.

For voters not familiar with the show, it might be hard to understand the context of visiting Janet’s voids to find a switch to cancel the Earth. So it may not be a particularly accessible episode out of context.

She may split the farewell vote with Annie Murphy who is also competing for the last season of her series, “Schitt’s Creek,” which earned more nominations (15) than “The Good Place” did.

It’s strange the academy took this long to recognize Carden’s performance. Last year she was front and center in the critically acclaimed and Emmy-nominated (for writing) episode “Janet(s).” Perhaps voters aren’t as keen on her as the critics and fans have always been been?