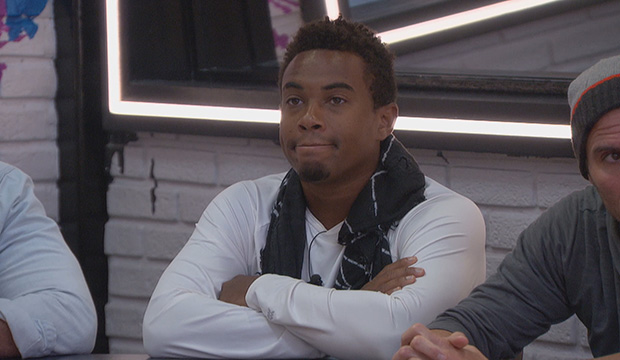 We know what you’re thinking, “Big Brother 22” fans: did David Alexander really go for a $10,000 prize instead of fighting for his life in the Veto competition? Yes. Yes, he did. Now David is starting to wonder whether he made the ultimate “mistake” as we head into Thursday’s triple eviction episode.

David and Kevin Campbell began Wednesday’s Veto episode nominated for eviction by Head of Household Cody Calafiore. After Cody made it known that Kevin was his true target, David started to feel a bit too comfortable. During the OTEV comp, David opted not to participate in any of the musical chair rounds because he chose to play the $10,000 T-shirt prize instead. The other houseguests were shocked — mostly because that meant they couldn’t have the money, but also because he didn’t apparently care about his life in the game.

“I was feeling like I wasn’t a target and I was feeling really good about the 10K. But after talking to Cody, I’m starting to feel a little iffy about it,” David confessed in the Diary Room. “Houseguests can now use that against me to vote me out. So on the one hand I have $10,000, but on the other hand, that could lead to eviction. Oh my goodness, did I make a mistake?”

Cody ended up winning the Veto and choosing not to use it, which now means either David or Kevin will get sent packing first thing during the historic triple eviction. But David’s mistake could end up being great news for Kevin. As he explained to the camera, “The Veto doesn’t get used, but when one door closes another door cracks slightly open. And David taking the $10,000 is just the crack that I need. Knock knock, I’m coming through.”

In the Diary Room, Cody was relieved he didn’t have to put up any members of his Committee or Wise Guys alliances. “So I got through my HOH without having to nominate any of my allies, which is perfect,” he said. “Hopefully Kevin is the one that goes home this week. And now we’re gonna get to a point where the alliance is gonna target each other. Things are about to get crazy. It’s gonna be dog-eat-dog in here and there’s no telling who’s gonna get bit.”

Here’s our educated guess on how Thursday night will play out. The two-hour episode will begin with the elimination of David or Kevin. Then there will be a Head of Household competition, a nominations ceremony, a Veto challenge, a Veto meeting and a second live eviction. The pattern will then repeat itself all over again, with a third person leaving at the end of the second hour. Stay tuned.