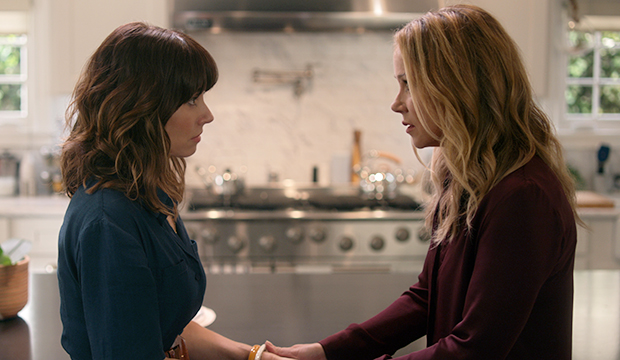 Last year only Christina Applegate received an Emmy bid for her role in Netflix’s dark comedy series “Dead to Me,” but this year we’ll likely see co-lead Linda Cardellini nominated as well. According to our recent poll results, 89% of fans think BOTH ladies will show up in Best Comedy Actress when the 2020 Emmy nominations are unveiled on July 28. As for the other voters, 9% think Applegate will be recognized solo while 2% believe Cardellini will be the only leading nominee. What do YOU think, Derbyites? Give us your Emmy predictions right now.

We know what you’re thinking: with so much great television out there, will the Emmys really nominate co-stars against each other from the same show, as opposed to spread the wealth? Well, “Dead to Me” would actually be the 7th show with co-nominees in Best Comedy Actress. Recent examples include Jane Fonda and Lily Tomlin for “Grace and Frankie” (2017), Marcia Cross, Teri Hatcher and Felicity Huffman for “Desperate Housewives” (2005) and Bea Arthur, Rue McClanahan and Betty White for “The Golden Girls” (1986-89). In many cases one of the nominees actually overcame vote-splitting to prevail, such as “Housewife” Huffman and each of the “Golden Girls” in 1986 (White), 1987 (McClanahan) and 1988 (Arthur).

SEE ‘Dead to Me’s’ Christina Applegate and Linda Cardellini on the joys of improv: ‘That gets my juices going’ [EXCLUSIVE VIDEO]

As of this writing, 21 Emmy Experts predict Applegate will receive a repeat nomination in Best Comedy Actress while 10 pick Cardellini to earn a bid. However, none of our Experts think either leading lady will win; instead, they’re split between Catherine O’Hara (“Schitt’s Creek”), Rachel Brosnahan (“The Marvelous Mrs. Maisel”) and Merritt Wever (“Run”).

Applegate and Cardellini really get to sink her teeth into their roles of Jen Harding and Judy Hale, respectively, after they seemingly meet by chance in grief counseling. Throughout the series, the two women go through a roller-coaster of emotions as every episode ends with a twist that shakes up their friendship. But they always persevere, thanks in part to wine. Season 2 of “Dead to Me” streamed May 8 on Netflix.