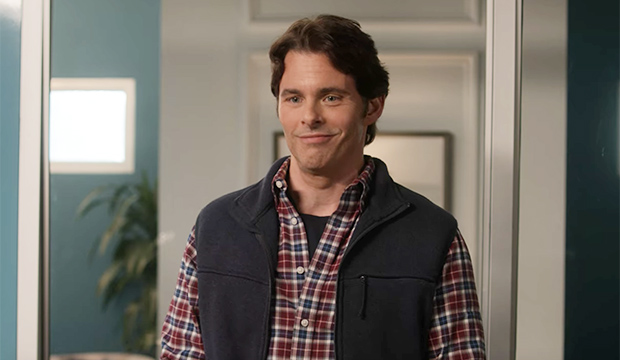 [WARNING: The following story contains spoilers about Season 2 of “Dead to Me.” Read at your own risk.]

In the first season finale of “Dead to Me,” James Marsden‘s character, Steve Wood, is killed and is last seen floating face down in Jen’s (Christina Applegate) pool, bleeding out. RIP Steve… right? Fans started theorizing that perhaps Steve isn’t dead when Marsden received his own title card in the Season 2 trailer or maybe he is dead and is just appearing in flashbacks. It’s the latter, but more. Steve is as dead as the day is long and does pop up in flashbacks, but Marsden lives on as a completely new character: Steve’s identical — excuse us, semi-identical — twin brother Ben. It’s a twist that could’ve gone wrong in so many ways, but it works because of Marsden’s first-rate performance that warrants a Best Comedy Supporting Actor Emmy nomination.

The idea of introducing a never-before-mentioned twin so an actor can remain on a show is automatically eye-roll-inducing. And yes, it is very much so a gimmick, but like so many of the outrageous twists that occur on the dark comedy, it’s one you just have to go with to enjoy surprisingly wonderful returns. “Dead to Me” avoids the pitfalls of the twin trope by making Ben the polar opposite of Steve, which sounds like an obvious thing to do, but would fail miserably without the proper execution from Marsden.

As Steve, Marsden coolly embodied the hotshot BMOC. An attorney, Steve was smarmy and charming, suave and also a dick to his ex-fiancée Judy (Linda Cardellini), on whom he cheated, and most people. He was also laundering money for the Greek mafia. As Ben, Marsden is also charming, but in a delightfully dorky way in that he doesn’t know he’s charming. A chiropractor and recovering alcoholic, Ben is nowhere near as confident or arrogant as Steve, a result of a heart defect that necessitated seven surgeries when he was a child and made him so insecure that he never bared his chest at the beach. He’s awkward, kind, has some sweet dance moves, uses outdated slang, and never passes up a chance to tell a bad dad joke (as a chiropractor, he’s “got your back”).

He’s a fully realized, endearing character that Marsden establishes right off the bat, and soon you forget that Ben and Steve are played by the same person. You’re reminded periodically with flashbacks to the night of Steve’s death, when he antagonized Jen, offering a nice juxtaposition of Marsden’s range and dual roles as one-time menacing a—hole and now a sensitive dork. Steve’s health struggles also fit beautifully with the show’s theme of trauma, allowing the actor to showcase his versatility in single scenes, just like Applegate and Cardellini have been able to do for two seasons, as “Dead to Me” deftly, quickly toggles between light and dark tones.

In the fifth episode, Ben tells Jen, a former dancer, that he took dance lessons as a child. Naturally, she asks for a performance. What follows is a hilariously goofy combo of tap, Tom Cruise‘s “Risky Business” slide (not in underwear, unfortunately), the worm, a backspin and “a little ‘Magic Mike.'” Marsden fully commits to the bit, and while you’re still laughing after it’s over, he seamlessly pivots to a poignant speech about his falling-out with Steve: They haven’t talked in a year after an alcohol-fueled fight, and now with Steve “missing,” Ben, holding back tears, regrets not trying to make amends sooner. It’s a tricky transition that would fall flat in less capable hands.

Ben soon wins over Jen and becomes her love interest — a great wink at not just Steve being the one who always got the girl, but the fact that Marsden has made a career, save for “27 Dresses” (2008) and “30 Rock,” of not getting the girl in the end in many of his projects. And despite a lengthy résumé and being a welcome, reliable screen presence, Marsden has also been vastly underappreciated. He’s never been Emmy-nominated, and his only industry recognition so far has been four ensemble nominations at the Screen Actors Guild Awards for “Hairspray” (2007), “The Butler” (2013), “30 Rock” in 2014 and “Westworld” in 2017.

SEE ‘Dead to Me’ Season 2 will resurrect the comedy categories at the Emmys, predict these savvy Emmy Experts

Helping Marsden’s Emmy hopes is his open category. Only two of last year’s six nominees — reigning champ Tony Shalhoub (“The Marvelous Mrs. Maisel”) and Alan Arkin (“The Kominsky Method”) — are eligible to return since “Veep” has ended and “Barry,” which took up three slots last year, is skipping this cycle. If “Dead to Me,” which scored a surprising nomination for Applegate last year, has a sophomore breakout at the Emmys, like so many shows have done, Marsden could get swept up in the love. “Killing Eve” earned two nominations for its first season in 2018, for Sandra Oh and Phoebe Waller-Bridge in writing, but jumped to nine last year, including for drama series, double lead noms for Oh and Jodie Comer, and a supporting mention for Fiona Shaw. “Dead to Me” could pull the same upgrade: a series nomination (it’s in fifth place in our odds), a comedy actress twofer for Applegate and Cardellini (the latter of whom recently joined her co-star in our predicted top six), and a supporting slot for Marsden.