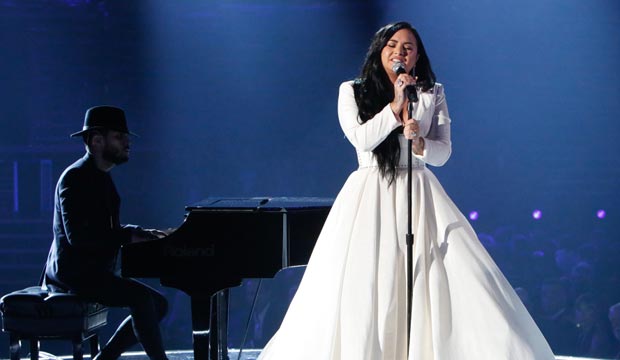 The Grammys ran for almost four hours with dozens of performers taking the stage throughout the night, but out of all of them, the artist who ruled the event was Demi Lovato. That’s according to the music fans we polled after the marathon telecast was over. Scroll down to see our complete results, and you can keep voting here if you disagree with our readers.

It had been a while since Lovato had performed publicly. Over the years she has struggled with depression and substance abuse, and in 2018 she relapsed and almost died due to a drug overdose. The song she premiered on Grammy night, “Anyone,” was a cry for help that she actually wrote and recorded shortly before her 2018 hospitalization. It was so clearly emotional for her that she had a false start at the beginning of her performance, having to begin again after collecting herself.

She delivered a powerful vocal full of raw emotion, and it ended with a standing ovation for the 27-year-old singer. Our readers also cheered: almost a quarter of them (23%) said that she was the highlight of the night, which was far more than any other artist got.

SEEWho has the most Grammys of all time? Beyonce, John Williams and Chick Corea rise on the list with their 2020 wins

Placing second with 11% of the vote was Lizzo‘s dazzling opening medley of “Cuz I Love You” and “Truth Hurts.” She began her performance by paying tribute to basketball star Kobe Bryant, who died earlier that day in a shocking helicopter crash, which gave it extra weight when Lizzo sang the first lines: “I’m crying ‘cuz I love you.”

Another 10% of respondents thought the best performance was given by Billie Eilish, who was accompanied by her brother –and fellow five-time Grammy winner Finneas — on a stripped down version of “When the Party’s Over,” which was full of nearly as much sadness and longing as Lovato’s searing performance.

Did you love Lovato, Lizzo and Eilish as much as we did on Sunday night? Check out the poll results below, and vote here if you haven’t already.