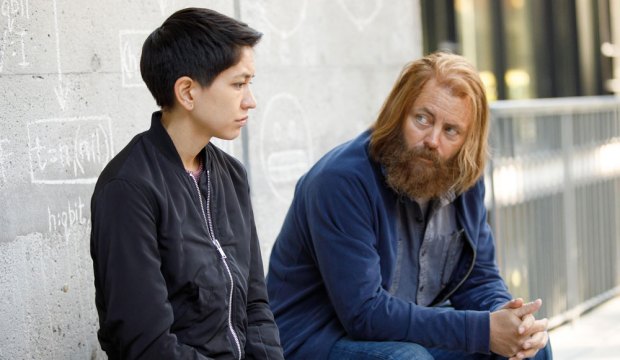 On March 5, “Devs” began the FX on Hulu partnership where the cable channel creates original content for the streaming service. This limited series is created by Oscar nominee Alex Garland, the writer and director behind the mind-bending sci-fi dramas “Ex Machina” and “Annihilation.” It’s his first foray into series television, so what do critics think of his latest cerebral thriller?

As of this writing the series has a MetaCritic score of 72 based on 29 reviews counted thus far: 21 positive, 7 somewhat mixed, only 1 outright negative. On Rotten Tomatoes, which classifies reviews simply as positive or negative and not on a sliding scale as MetaCritic does, the series has a freshness rating of 84% based on 43 reviews, only 7 of which are counted as negative. The RT critics’ consensus says, “A hauntingly beautiful meditation on humanity, ‘Devs” slow unfurling may test some viewers’ patience, but fans of Alex Garland’s singular talents will find much to chew on.”

Sonoya Mizuno is “captivating” as Lily Chan, a computer engineer who thinks her company may be responsible for her boyfriend’s disappearance. But there’s more going on than meets the eye — not that critics are saying exactly what that is. It’s a “stunningly ambitious” series, “daring,” “transfixing,” “sometimes scary” and “beautiful.” But reviewers also note that it can be “dry,” “frustratingly opaque” and its payoff “isn’t as satisfying” as it could have been.

So will Garland find Emmys success with this series? HBO’s “Westworld” proved that the television academy has room for heady sci-fi with existential puzzles, and voters also like singular filmmakers who venture onto the small screen, from Martin Scorsese (“Boardwalk Empire”) to Steven Soderbergh (“Behind the Candelabra”) to Ava DuVernay (“When They See Us”). Check out some of the reviews below, and join the discussion on this and more here with your fellow TV fans.

Brian Tallerico (RogerEbert.com): “The genius behind ‘Ex Machina’ and ‘Annihilation’ brings his brand of highly philosophical and intellectual sci-fi to the new ‘FX on Hulu’ section this week with the stunningly ambitious ‘Devs,’ a great show that’s almost impossible to write about in a review … All I’ll say is that it’s a daring and new deconstruction of one of the basic tenets of human existence.”

Liz Shannon Miller (Paste): “The world [Alex Garland] crafts proves to be an austere, sometimes scary, but more often beautiful one. Lovers of ‘Ex Machina’ will feel like they’re snuggling into a bed made up with just-washed sheets; those who found that movie cold and aloof will yearn for a warm quilt … While this exceptional cast proves exceptional here as well — Mizuno in particular is a captivating lead — the dry tone means that everyone is playing things super-straight.”

Jen Chaney (Vulture): “In the films ‘Ex Machina’ and ‘Annihilation,’ writer-director Alex Garland established his flair for psychologically intense, intellectually engaging science fiction. With ‘Devs’ — an FX on Hulu original whose first two episodes debut today exclusively on Hulu — he attempts to transfer those skills to episodic television, with results that range from transfixing to frustratingly opaque.”

Benjamin Lee (The Guardian): “We’ve been burned before by some awfully indulgent shows from film-makers in need of a tighter edit. ‘Devs,’ thankfully, is not an example of this and while it maybe runs an episode too long, it’s a mostly well-plotted and delicately paced drip-feed of information … Where it all ends up, in what’s set to be a divisive finale, isn’t as satisfying, emotionally or narratively, as I’d hoped.”