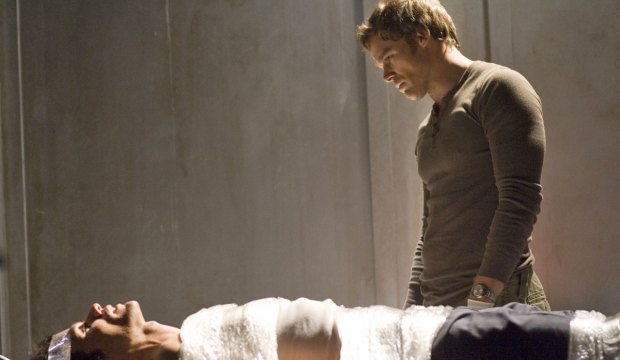 Showtime has announced that America’s favorite serial killer, “Dexter,” will return for a 10-episode limited series set to premiere next fall. Golden Globe winner Michael C. Hall will reprise his role as the title character, Dexter Morgan, reuniting with showrunner and screenwriter Clyde Phillips. So does this mean Hall could finally take home the Emmy that eluded him for five straight years?

Despite winning a Golden Globe and SAG Award in 2010, the celebrated actor was never able to secure the top prize from the television academy. Hall came up short five years in a row, losing three times to Bryan Cranston (“Breaking Bad,” 2008-2010) followed by Kyle Chandler (“Friday Night Lights,” 2011) and Damian Lewis (“Homeland,” 2012). He was also nominated once for Best Drama Series as an executive producer (2011), but lost to “Mad Men.”

“‘Dexter’ is such a special series, both for its millions of fans and for Showtime, as this breakthrough show helped put our network on the map many years ago,” said the Co-President of Entertainment for Showtime, Gary Levine. “We would only revisit this unique character if we could find a creative take that was truly worthy of the brilliant, original series.”

Over the course of eight seasons, “Dexter” earned a total of 19 Emmy nominations, including five for Hall as Best Actor. It prevailed four times including wins for Steve Shill (Best Drama Directing) and John Lithgow (Best Drama Guest Actor) in 2010. Before that, in 2007, it took home Creative Arts wins for its main title design and single-camera picture editing (Elena Maganini).

“Dexter” originally aired from 2006 to 2013, with the series finale garnering Showtime its highest ratings ever at the time. In the last episode, the seemingly harmless blood spatter expert by day, sociopath killer of wrongdoers by night faked his own suicide. He grew a beard, headed into the woods and looked like he was living a lumberjack lifestyle in peace. Dexter had sent his son, Harrison, with his love interest Hannah (Yvonne Strahovski) to Buenos Aires, Argentina.

That ending was controversial to say the least, so after eight years “Dexter” might finally receive the sendoff it always deserved. As for Hall taking home that Emmy he missed out on, that would be a first. For all the successful TV reboots in recent years, none have landed anyone a Best Actor award in the limited series/TV movie category. Kiefer Sutherland may have come the closest to that feat with his nomination for “24: Redemption,” a 2008 film based on the original series, “24.”

There’s a strong possibility, though, that the television academy will keep the show in the drama series races since this will be a continuation of an established story and character. But wherever Hall is slotted in, can he make more history by finally winning for his most famous role?

Mark Swift ('The Croods: A New Age' producer) tells of the challenges of creating a new antagonist for…