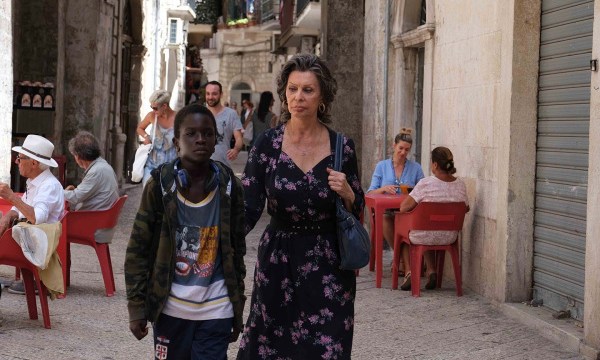 Prolific composer Diane Warren has written nine number one songs and had 32 tunes hit the Top Ten on the Billboard Charts. She has won a Grammy, an Emmy, a Golden Globe and three consecutive Billboard Music Awards for Songwriter of the Year. She’s also be named ASCAP’s Writer of the Year three times and was inducted into the Songwriter Hall of Fame in 2001. But one honor that has eluded her is the Academy Award. Though she hasn’t reach Susan Lucci territory (she finally won an Emmy for “All My Children” on her 19th nomination) Warren has been a bridesmaid at the Oscars 11 times.

But she may well win this year for her wistful ballad “Io Si (Seen)” from the Italian-language Netflix drama “The Life Ahead,” which begins streaming Nov. 13. Laura Pausini, who recorded the song, co-wrote the Italian lyrics with Niccolo Agliardi.

The legendary 86-year-old Oscar-winner Sophia Loren stars as former prostitute and Holocaust survivor who looks after the children of street walkers in Naples. She forms a strong bond with her latest charge, the unruly 12-year-old Momo who recently robbed her.

Loren’s son Edoardo Ponti directed and co-wrote the drama based on Romain Gary’s 1975 novel “The Life Before Us.” “The Life Ahead” is the second feature film adaptation of the Gary’s book. The French-language 1977 version “Madame Rosa,” starring the Simone Signoret, won the Oscar for Best Foreign Language Film.

60th Oscars: Warren and Albert Hammond were nominated for “Nothing’s Gonna Stop Us Now” from “Mannequin” and lost to (“I’ve Had) The Time of My Life” from “Dirty Dancing” by John DeNicola, Donald Markowitz & Franke Previte  (music) and lyrics by Previte.

69th Oscars: Warren was nominated for “Because You Loved Me” from “Up Close & Personal” and lost to “You Must Love Me” from “Evita” by Andrew Lloyd Webber (music) and Tim Rice (lyrics).

70th Oscars: Warren was nominated for “How to I Live” from “Con Air” and lost to “My Heart Will Go On” from “Titanic” by James Horner (music) and Will Jennings (lyrics).

71st Oscars: Warren was nominated for “I Don’t Want to Miss a Thing” from “Armageddon” and lost to “When You Believe” from “The Prince of Egypt” by Stephen Schwartz.

74th Oscars: Warren was nominated for “There You’ll Be” from “Pearl Harbor” and lost to “If I Didn’t Have You” from “Monsters, Inc.” by Randy Newman.

87th Oscars: Warren was nominated for “Grateful” from “Beyond the Lights” and lost to “Glory” from “Selma” by Common and John Legend.

88th Oscars: Warren and Lady Gaga were nominated for “Til It Happens to You” from “The Hunting Ground” and lost to “Writing’s on the Wall” from “Spectre” by Jimmy Napes and Sam Smith.

90th Oscars: Warren and Common were nominated for “Stand Up for Something” from “Marshall” and lost to “Remember Me” from “Coco” by Kristen Anderson-Lopez and Robert Lopez.

91st Oscars: Warren was nominated for “I’ll Fight” from “RGB” and lost “Shallow” from “A Star is Born” by Lady Gaga, Mark Ronson, Anthony Rossomando and Andrew Wyatt.

92nd Oscars: Warren was nominated for “I’m Standing With You” from “Breakthrough” and lost to (I’m Gonna) Love Me Again” from “Rocketman” by Elton John (music) and Bernie Taupin (lyrics).