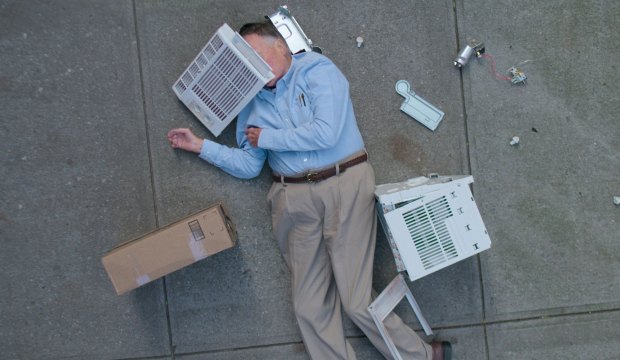 An unconventional Oscar contender for Best Documentary Feature premiered on Netflix on October 2: “Dick Johnson is Dead,” in which filmmaker Kirsten Johnson directs her father, retired clinical psychologist Richard Johnson, in a series of death enactments as a means of coping with his actual impending death. What do critics think of this unique, tragicomic approach to mortality?

Well, they love it. As of this writing the film has a MetaCritic score of 88 based on 21 reviews counted thus far, all of them positive. On Rotten Tomatoes, the film is just as universally loved with a perfect 100% freshness rating based on 43 reviews. The RT critics consensus says that the film “celebrates a life with bittersweet humor and grace, offering a deeply resonant perspective on mortality in the bargain.”

The film is being described as “weird,” “disarming,” “slippery,” “lightly blasphemous and inventive.” The film “revels in the art and artifice of filmmaking” and walks a fine line “between the celebratory and the elegiac” with detours into “exuberant goofiness.” At its center is a “hall-of-fame documentary subject” in Dick Johnson himself, who will “coax grins from even the most stoic audiences.” But the film also has “profound insights” when it “strays from strict adherence to the concept” and considers the Johnsons’ motivations for participating in such an unorthodox project.

This is a marked departure for Kirsten Johnson as a documentarian. Shes best be known for her 2016 film “Cameraperson,” a memoir she created with footage she shot throughout her career. That acclaimed film won her a Critics’ Choice Documentary Award and nominations from the Independent Spirit Awards, the Gotham Awards, the International Documentary Association and the Boston Society of Film Critics, among other plaudits.

SEEOscar spotlight: Jim Parsons’s visceral ‘Boys in the Band’ performance makes him the latest sitcom star to get serious

She has also worked as a cinematographer and camera operator on influential nonfiction films like “Fahrenheit 9/11” (2004), “The Invisible War” (2012) and the Oscar-winning “Citizenfour” (2014), among many other credits. So “Dick Johnson is Dead” is a marked tonal shift for the director, but it’s off to a good start this awards season, and not just with critics. The film bowed in January at the Sundance Film Festival, where it won a Special Jury Award for Innovation in Nonfiction Storytelling. And Netflix has made great strides at the Oscars in recent years, winning two of the last three documentary prizes for “Icarus” (2017) and “American Factory” (2019).

Will you be celebrating and mourning Dick Johnson over and over again now that the film is available to stream? Check out some of the reviews below, and join the discussion on this and more with your fellow movie fans here in our forums.

SEE2020 Emmy winners who could get an Oscar nomination in 2021: Regina King, Julia Garner, Zendaya …

Justin Chang (Los Angeles Times): “One of this documentary’s many weird, disarming pleasures is the obvious delight both Johnsons take in repeatedly faking Dick’s often-ghastly demise … From start to finish, ‘Dick Johnson Is Dead’ revels in the art and artifice of filmmaking — and a notably different kind of filmmaking from the documentaries Johnson has shot over nearly three decades.”

Manohla Dargis (New York Times): “One of the charms of ‘Dick Johnson Is Dead’ is how slippery it is. Pitched artfully between the celebratory and the elegiac, it is an inarguably serious documentary with light, surrealistic flourishes that, at times, veer into exuberant goofiness … It is also a love letter from a daughter to a father who, for the viewer, becomes fully human even as he fades away.”

Jessica Kiang (The Playlist): “As colorful, lightly blasphemous and inventive as all that is, it’s when Johnson strays from strict adherence to the concept that the most profound insights come — into Dick’s motivation for taking part in such a fate-tempting project, and into Johnson’s own agenda for putting herself and her father through an amusing but arduous round of coffin shopping, soul-searching, and fake-funeral-arranging.”

Vikram Murthi (The A.V. Club): “It helps tremendously that Dick Johnson himself is a hall-of-fame documentary subject, whose comfort on camera will coax grins from even the most stoic audiences … Still, you can too often feel her guiding hand in ‘Dick Johnson Is Dead.’ Her voiceover can be unnecessarily leading, especially when she’s explicating transparent subtext that the audience can glean themselves.”