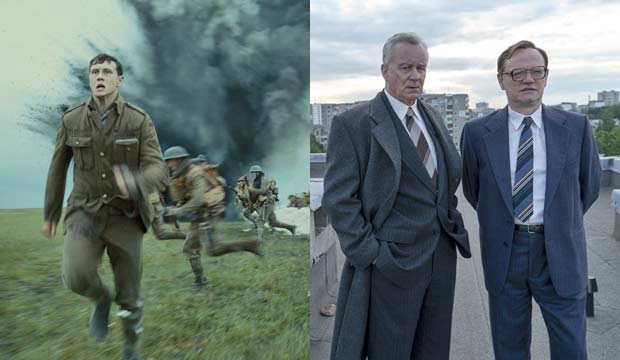 Sam Mendes is predicted to win the top prize at this weekend’s Directors Guild Awards for his work on the World War I drama “1917.” Scroll down for our forecasts in seven categories listed in order of our racetrack odds, with our projected winners highlighted in gold.

Our odds are based on the combined predictions of more than 1,600 registered Gold Derby users who have placed their bets here in our predictions center as of this writing. They think Mendes has the narrow advantage against Bong Joon Ho (“Parasite”). Both of their movies were big winners last weekend when “1917” claimed the Producers Guild Award for Best Picture and “Parasite” took the Screen Actors Guild Award for its ensemble cast. A win here may solidify one film or the other as the Oscar front-runner.

At the very least, the winner here will likely be the Best Director favorite at the Oscars: 15 of the last 16 DGA champs were ultimately awarded by the motion picture academy. Lately, though, the DGA Awards don’t line up as reliably with the Oscar for Best Picture: they have disagreed three times in the last four years.

Meanwhile, our current Oscar front-runner for Best Documentary Feature, “American Factory,” is favored to win here for filmmakers Steven Bognar and Julia Reichert. And Alma Har’el is the front-runner to win Best First-Time Director for “Honey Boy,” which would make her the first woman to win that prize in the five years it has been handed out.

Television winners are expected to replicate recent industry events, with “Chernobyl” and “Succession” predicted to follow their Producers Guild Awards victories, while “Barry” director Bill Hader is likely to be honored without “Fleabag” in the running. Do you agree with our consensus choices? See them below, and make or update your own predictions here before winners are announced on Saturday night, January 25.