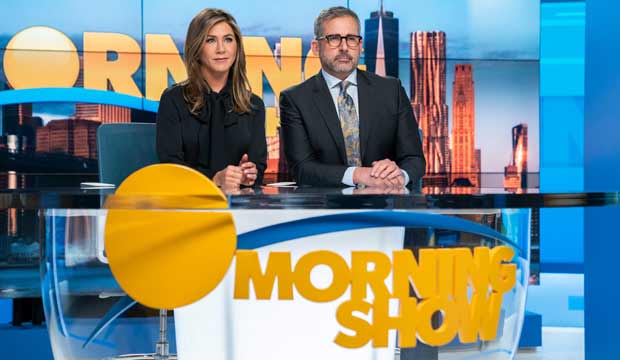 Ever since Netflix introduced its first-ever awards contender “House of Cards” in 2013, streaming services have emerged as major Emmy players alongside cable and broadcast TV. Now Netflix just scored the most nominations (160, smashing HBO’s record tally of 137 last year), while the newest streaming platforms to compete – Disney +, Apple TV+ and Quibi – make notable entries to the Emmy derby.

Disney+ drew 19 nominations, 15 of those for Jon Favreau‘s “Star Wars” spin-off “The Mandalorian.” Most impressive? Baby Yoda and the gang got into the race for Best Drama Series, making it the first of the sci-fi saga’s many properties to claim a major showbiz nod since the original 1977 space opera earned a Best Picture Oscar slot.

Apple TV+ amassed 18 nominations, 8 of them for its flagship offering “The Morning Show,” which launched last November. The new drama series that revolves around the cutthroat world of  a daybreak TV news shows reaped the most nominations for acting (5) ever earned by a streaming service in its inaugural year.

Jennifer Aniston, who won an Emmy for Best Comedy Actress in 2002 (“Friends”), could get a bookend trophy for her lead dramatic turn as a TV co-anchor in crisis mode. As for her co-stars, Steve Carell, he has yet to cradle an Emmy despite being nominated six times as a lead actor for “The Office.” He could now be acknowledged for his role as Aniston’s disgraced former on-air partner. Competing in the supporting category is Billy Crudup as a diabolical new manager of “The Morning Show” news operations. He shares the category with Mark Duplass as the program’s head producer. Martin Short was nominated in the guest-acting race as Carell’s longtime buddy. Also notable is Mimi Leder‘s bid for Best Director of a Drama Series.

As for the quirky Quibi, which features shows with episodes that run 10 minutes or less, Jeffrey Katzenberg‘s brainchild gathered 10 nominations, basically dominating the category of Outstanding Actor in a Short Form Comedy or Drama Series, taking four out of the five slots with the likes of Laurence Fishbourne and Stephan James for “#FreeRayshawn” and Christoph Waltz for “The Most Dangerous Game.” Meanwhile, Anna Kendrick got her first Emmy chance ever for “Dummy,” making her one four Quibi female performers nominated for Outstanding Actress in a Short Form Comedy or Drama series.