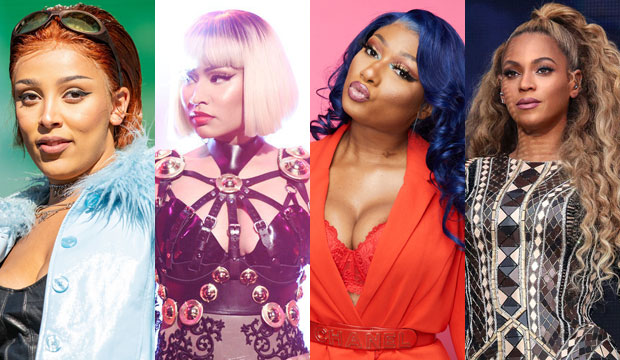 In a post-“Despacito,” post-“Old Town Road” music world, it’s not uncommon for artists to give themselves a boost on the charts with the help of a remix. This week it paid dividends for two different songs, but only one came out on top: Doja Cat jumped to the number-one spot on the Billboard Hot 100 singles chart dated May 16 with her “Say So” remix with Nicki Minaj. And it’s not just Doja Cat’s first chart-topper, it’s Minaj’s too.

The disco-infused “Say So” has been in the top 10 for a few weeks now, but the release of its Minaj remix on May 1 bumped it up five spots to the lead position. It’s the breakthrough hit for Doja Cat, but Minaj  charted more than 100 other songs on the Hot 100 before finally ascending to the top position with this one. That’s surprising given how many times she has come close: Minaj has been in the top five with songs including “Super Bass,” “Starships,” “Bang Bang,” “Anaconda,” “Turn Me On,” “Beauty and a Beat,” “Side to Side” and “Fefe.”

SEETop 22 artists who shockingly have never won a Grammy

Coming in at number-two on this week’s chart is the other new remix. Megan Thee Stallion‘s “Savage” was at number-four last week and has climbed two places in the first full week for her new version of the song with Beyonce. Though it’s not number-one (yet), it’s still Megan’s highest position on the chart to date, and it marks Beyonce’s 19th top-10 hit. It’s not the first time Beyonce has risen so high by backing up another artist. She was number-one for joining Ed Sheeran on a duet version of his song “Perfect,” and she reached number-three as a featured artist on J Balvin and Willy William‘s “Mi Gente.”

Which remix do you prefer? Listen to them both below, and vote in our poll at the bottom of this post.