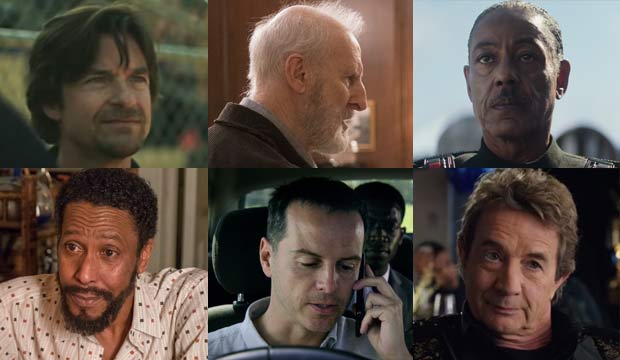 Four of the men nominated for Drama Guest Actor already have at least one Emmy Award on their mantle, while the other two nominees are looking for their first win. A dynamite episode submission is a key factor in deciding a winner. We have weighed the pros and cons of every episode submission to better help you deduce who might win the Drama Guest Actor race this year. Who will win at the Creative Arts Emmys on Saturday, September 19? Follow the links below for each episode analysis.

Jason Bateman is a ten-time Emmy nominee. For acting, he has two Comedy Lead Actor bids for “Arrested Development” and three Drama Lead Actor bids for “Ozark.” The latter series also netted him two Drama Series nominations and two Drama Directing nominations. He won Drama Directing last year. For this Guest Actor bid, he has submitted the episode “Fish in a Barrell” for consideration: An 11-year-old boy is murdered in Georgia, and the eyewitness and physical evidence points to local teacher and baseball coach, Terry Maitland. He’s publicly arrested on the baseball field, and the police are perplexed by Terry’s indifference to hiding his crime. While looking into the case, they discover Terry’s doppelganger.

This is Cromwell’s fifth Emmy nomination. He was previously nominated for “RKO 281,” “ER,” and “Six Feet Under.” He finally won on his fourth try, for “American Horror Story: Asylum.” This year, he has submitted the episode “Dundee” for consideration: Logan’s older brother surprises Logan at his fifty-years-in-business celebration in their hometown of Dundee, Scotland. It appears Ewan is there for support, but in reality he thrives on his resentment. He threatens his grandson Greg with dire consequences if he doesn’t part ways with Logan.

Esposito is a four-time Emmy nominee. He was previously nominated in Drama Supporting Actor for “Breaking Bad” and it’s spin off “Better Call Saul.” He has a second nomination for “Saul” this year, in addition to his bid for “The Mandalorian.” He has submitted the episode “Chapter 8: Redemption” for consideration: Former Imperial official Moff Gideon traps Mando, Cara and Greef, bearing down on them with his formidable arsenal of stormtroopers and tormenting each with a detailed summary of their hidden pasts. An escape attempt by Mando’s crew ends with Gideon’s defeat, but not demise – he will fight another day.

Ron Cephas Jones, “This is Us”

This is the fourth Emmy nomination for Jones, all of which are for playing William on “This is Us.” His first nomination was in Drama Supporting Actor before moving to the Guest Actor race. He won this category in 2018. This time, he has submitted the episode “After the Fire” for consideration: Randall (Sterling K. Brown) reflects on what could have been including his relationship with William (Ron Cephas Jones).

This marks Andrew Scott’s first career Emmy nomination! He has submitted the episode “Smithereens” for consideration: A cab driver (Andrew Scott) with an agenda becomes the center of attention on a day that rapidly spirals out of control.

Short has amassed 12 Emmy nominations with two wins. He earned five nominations for writing “SCTV,” winning on the fifth try. He won again in Variety Special for “AFI Life Achievement Award: A Tribute to Mel Brooks.” Short was also nominated for “Merlin,” “Primetime Glick,” “Damages,” and “Steve Martin and Martin Short: An Evening You Will Forget for the Rest of Your Life.” For his latest bid, Short has submitted the episode “Chaos is the New Cocaine” for consideration: A friend of Mitch Kessler, Dick Lundy is a disgraced film director who’s been similarly affected by the #MeToo movement. The two commiserate over their current situation, but Mitch is soon taken aback by Dick’s point of view, which forces him to genuinely consider his actions.