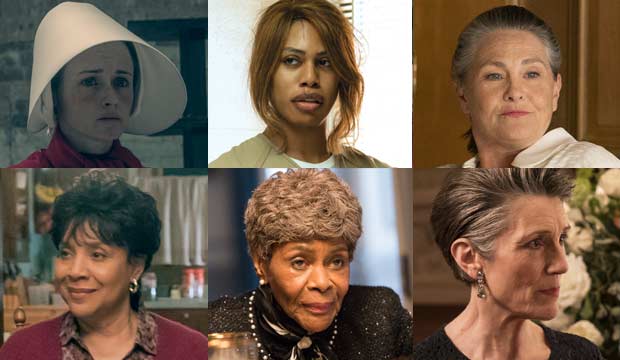 This year’s crop of Drama Guest Actress nominees feature acting legends, returning Emmy favorites and a first time nominee. The guest acting categories frequently provide the biggest surprise winners each year, and those shockers often come down to a knockout episode submission. We have analyzed the submissions of each actress to give you the lowdown on which contenders might walk away with the trophy thanks to their smart episode selection. Who will win at the Creative Arts Emmys on Saturday, September 19? Follow the links below for each episode analysis.

This is Bledel’s third Emmy nomination for playing Ofglen/Emily on Hulu’s “The Handmaid’s Tale.” She won for Guest Actress on her first try in 2017 before being bumped up to Supporting Actress in 2018. This year she has submitted the Season 3 episode “God Bless the Child” for consideration: After escaping Gilead with baby Nichole, Emily is now a refugee in Canada. She eventually reunites with her wife and son but struggles to adjust to life in a free world as she is forced to confront her past crimes in Gilead.

This is Cox’s fourth Emmy nomination in the Guest Actress category for playing Sophia Burset on Netflix’s “Orange is the New Black.” Her nomination in 2014 made her the first openly transgender actress nominated for a Primetime Emmy. Cox has won a Daytime Emmy for producing the documentary “The T Word.” The actress has submitted the episode “God Bless America” for consideration: Laverne Cox plays Sophia Burset, who is now out of prison and running her own salon. When she runs into Piper Chapman at their parole office, Sophia offers her services to Piper, which she happily accepts in advance of a fancy gala she’s attending.

This is Jones’ fourth Emmy nomination. She won Supporting Drama Actress for “24” before picking up two Drama Guest Actress nominations for “The Handmaid’s Tale.” She won a second Emmy statue for her 2019 “Handmaid’s” bid. This year, she has submitted the “Succession” episode “Tern Haven” for consideration: Nan Pierce is the bull-headed matriarch of her powerful New England family and owner of PGM, Logan’s newest planned acquisition. Nan needs to discover for herself if she can ultimately trust Logan’s intentions with her family’s business and legacy.

Phylicia Rashad, “This is Us”

Cicely Tyson, “How to Get Away With Murder”

This is Tyson’s sixteenth Emmy nomination. She has won three Emmy Awards: Drama Lead Actress & Actress of the Year – Special for “The Autobiography of Miss Jane Pittman,” and Mini/Movie Supporting Actress for “Oldest Living Confederate Widow Tells All.” The acting legend earned additional bids for “Roots,” “King,” “The Marva Collins Story,” “Sweet Justice,” “A Lesson Before Dying,” “Relative Stranger,” “The Trip to Bountiful,” and “How to Get Away with Murder.” For her fifth bid for “Murder,” Tyson has submitted the episode “Stay” for consideration: Annalise discovers there’s a surprise witness that threatens her case. Meanwhile, Connor tries to persuade the K3 to go along with a new plan. Elsewhere, a lie between Frank and Bonnie threatens their relationship as the killer is finally revealed. Series Finale.

This marks Walter’s first career Emmy nomination! For the actress’ first time up at bat, she has submitted the episode “Return” for consideration: Lady Caroline Collingwood is the ex-wife of Logan Roy and the mother of three of his children: Kendall, Roman and Shiv. Caroline still owns stock in Logan’s company and uses it as leverage against Logan. Her ploy works so well that her children travel to London to negotiate with her.