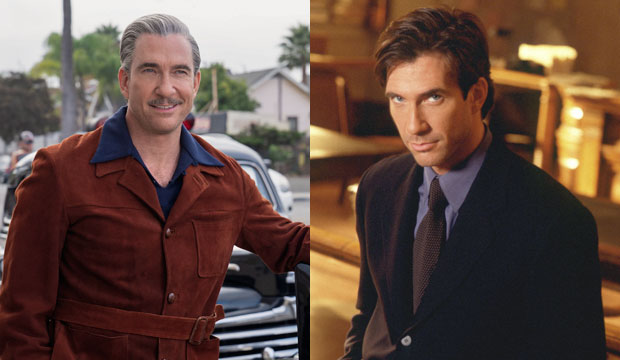 The Emmys love David E. Kelley shows. That included “The Practice,” which won Best Drama Series twice (1998-1999) in addition to 13 acting prizes for its cast. But leading man Dylan McDermott never won and was only nominated once (1999). What’s more, when James Spader took the lead for the show’s last season, he won. But 21 years later McDermott has earned his second career Emmy nom: Best Movie/Limited Supporting Actor for “Hollywood.” Will the television academy make it up to him after all this time?

In this 1940s-set alternate history of Tinseltown, McDermott plays Ernie West, who gives aspiring actor Jack Castello (David Corenswet) a job at his gas station before Jack realizes the gas station is a front for male prostitution. But despite his gruff exterior Ernie is a pimp with a heart of gold who harbored his own dreams of stardom way back when.

It wasn’t a surprise that “Hollywood” scored a couple of nominations for Best Movie/Limited Supporting Actor — he’s joined in the category by Jim Parsons as a predatory talent agent — but the fact that McDermott was one of them was a bit of a surprise given how stacked the show’s supporting cast is. Besides Parsons and McDermott, Emmy winner Darren Criss, Tony winner Joe Mantello and up-and-comer Jake Picking had prominent roles. We had ranked McDermott 12th in our nomination predictions.

But now that McDermott has made the top six, can he win? There’s a risk he could split votes with Parsons, the current front-runner, but McDermott is overdue and plays the more sympathetic role. And he’s up against three actors from “Watchmen” (Jovan Adepo, Yahya Abdul-Mateen II and Louis Gossett Jr.) who may be even more at risk of splitting votes. Tituss Burgess (“Unbreakable Kimmy Schmidt: Kimmy vs. the Reverend”) is the only nominee without a co-star to compete against, but that film’s only other nomination is Best TV Movie, so it may have limited overall support from the TV academy.

So does McDermott finally have a shot at his first win, or is it just too hard out here for a pimp?