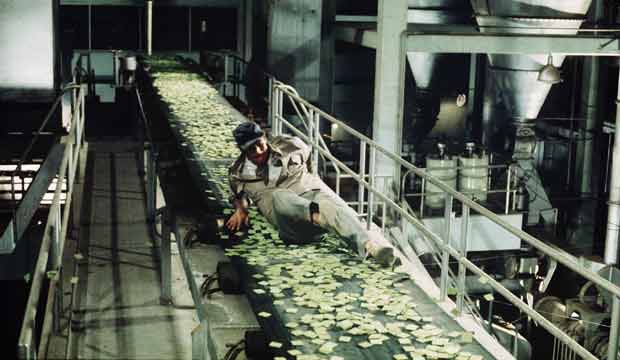 The world today can feel like a depressing place. A pandemic has shut down entire countries, a massive communication network has upended society, almost every person on Earth owns a supercomputer that fits in their pocket, protests against injustice rage in cities across the globe, and the rich get richer while the poor get poorer. Life often feels more and more like a movie, specifically the movies we’ve collected below. Take a break from watching the world fall apart outside, and scroll through our photo gallery of these iconic films featuring striking visions of a dark future.

The word “dystopia” was originally created to be the antonym of “utopia” and literally translates to “bad place.” Dystopian fiction focuses on societies, usually in the future, where negative aspects of our current world have progressed to extreme lengths. Freedom is curtailed by either governments or corporations, cities are rampant with crime leading to oppressive police action, and the environment has been destroyed making Earth a dark and dismal place to live. Inequality is a major theme, with the rich living in obscene luxury while everyone else fights for scraps and lives in squalor. New systems of control are invented, usually utilizing advanced and futuristic technology. Sometimes a dystopia is characterized by strict control and lack of free will, and sometimes by the collapse of civilization; often one leads to the other.

These films are unfortunately as relevant today as they were when they were made. Despite their subject matter, they also offer hope, even if it is only a tiny victory. Heroes rise up to fight against their rulers. Systems of oppression are exposed and brought down. Inequality is destroyed as the lower classes take control. In spite of everything the human spirit perseveres. More often than not the endings of these movies are bittersweet, but they offer some direction in tough times. If you need some guidance of what to do in times of trouble, or you just want to stick it to the Man, the films below are the perfect place to start. Our list includes “Blade Runner,” “Children of Men,” “Snowpiercer,” “Metropolis,” “Brazil” and more.