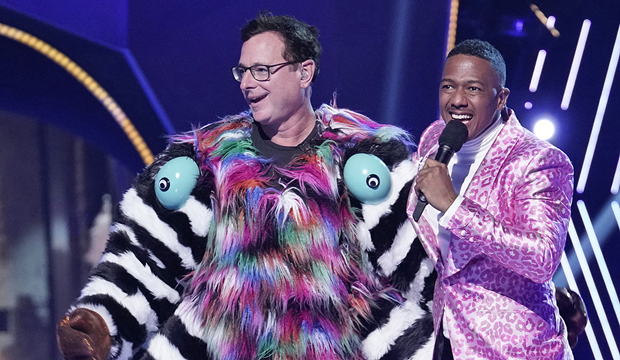 Sometimes on “The Masked Singer,” contestants give it their all on the stage but are still unfortunately eliminated thanks to the fierce competition. Season 4 has aired six episodes so far, with the following celebrities being forced to reveal their true identities in front of America: Busta Rhymes, Mickey Rourke, Brian Austin Green, Mark Sanchez, Wendy Williams and Bob Saget. Of this sextet, who do you think most deserves another shot at the Golden Mask?

Vote in our “TMS” poll below for who YOU think was robbed and then be sure to defend your choice in the comments section. Ten secret celebs remain in Fox’s reality TV competition — Popcorn, Snow Owls, Sun, Crocodile, Seahorse, Serpent, Whatchamacallit, Broccoli, Jellyfish and Mushroom — but only one will ultimately win.

Busta Rhymes as Dragon (Season 4, Episode 1)
Despite the rapper having an identifiably gravelly voice, he fooled half of the panelists, with only Robin Thicke and Nicole Scherzinger guessing correctly. “I felt like I was in an oxygen tank without oxygen,” Rhymes declared in his post-show interview.

Mickey Rourke as Gremlin (Season 4, Episode 2)
In a “Masked Singer” first, Rourke decided he was too hot inside the costume and so he self-eliminated before the voting process even began. Amazingly, Jenny McCarthy still guessed the raspy-voiced actor correctly. Unfortunately, Scherzinger didn’t even get to guess because Rourke removed his mask beforehand.

Brian Austin Green as Giraffe (Season 4, Episode 3)
Even though Green was childhood friends with Thicke, the judge failed to guess his secret identity. Guest panelist Joel McHale came the closest when he thought the Giraffe was actually “Beverly Hills 90210” star Jason Priestley.

Mark Sanchez as Baby Alien (Season 4, Episode 4)
This character made “Masked Singer” history as the first-ever puppet to take the stage. Sanchez, a retired NFL quarterback and current sports commentator, was officially one of the most shocking reveals of all time, as the panelists were mostly convinced Baby Alien was a stand-up comedian.

Wendy Williams as Lips (Season 4, Episode 5)
After being eliminated on her first appearance, the infamous talk show host admitted she couldn’t sing and couldn’t dance, but that she knew “how to have fun.” The two female panelists immediately recognized Williams’ trademark voice and laugh, while the two male judges were swayed by some of the clues and guessed incorrectly.

Bob Saget as Squiggly Monster (Season 4, Episode 6)
For the first time in Season 4, Ken Jeong correctly guessed a contestant’s true identity … and it’s all thanks to Saget. The comedian and TV star was almost unanimously chosen by the panel as the Squiggly Monster, with Scherzinger being the only holdout as she thought it was “Veep” star Gary Cole instead.