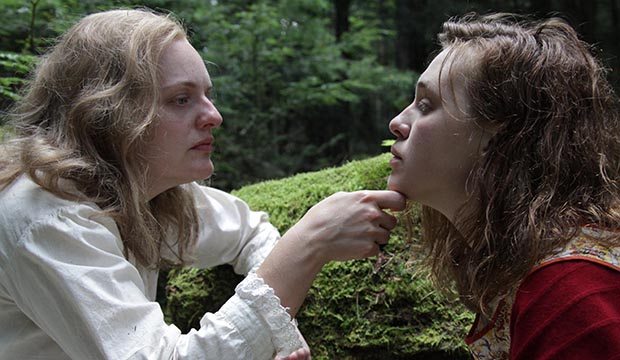 Elisabeth Moss is a celebrated actress with a slew of major awards and nominations under her belt. She claimed Best Drama Actress and Best Drama Series Emmys for “The Handmaid’s Tale.” She’s also won Globes for that show and the limited series “Top of the Lake.” And she was Tony-nominated for headlining the revival of “The Heidi Chronicles.” An Oscar nomination has thus far eluded her, but that could change this year thanks to her transformative work in “Shirley.”

In the film from director Josephine Decker, Moss plays famed horror writer Shirley Jackson. The author is struggling to complete her next novel. She keeps herself locked away in her house with a constant parade of cigarettes and booze at her lips. When Shirley’s husband Stanley (Michael Stuhlbarg) invites a young couple to stay with them and help around the house, Shirley grows infatuated with the young woman, Rose (Odessa Young). The film is less biopic and more of a surreal (and often fictional) psychological fever dream in the vein of Jackson’s own writing.

Moss gets lost in the obsessive and at times vicious woman that Jackson has become. Critics have already lavished praise on the actress. Donny Sheldon (Awards Watch) claims that “Moss delivers a ferocious, electrifying performance that ranks among the best work of her career.” David Ehrlich (IndieWire) reflects on the character’s erratic and scary antics, noting that “Moss — comfortably inhabiting all sorts of haggard makeup that she wears like a layer of cobwebs — embodies the author as an irritable grandma who’s been cooped up for long enough to haunt her own house.”

Awards watchers know that a strong narrative can be even more valuable in the Oscar race than a slew of kind reviews. In that sense, Moss has a secret ace up her sleeve: “The Invisible Man.” That contemporary update to Universal’s classic monster pic was a hit with audiences when it opened in February. Critics fell for the thriller too, as the film sits at an impressive 91 percent on Rotten Tomatoes. “The Invisible Man” was one of the last in-person movie going experiences before the pandemic shuttered theaters, so it should stick out in voters’ minds even months after its debut. Genre bias will likely prevent “The Invisible Man” from becoming a major Oscar player, but it provides Moss a stunning contrast to her performance in “Shirley.”

Oscar voters love rewarding performers when they get to showcase all the tricks in their acting tool belt across multiple movies in one year. Look no further than Scarlett Johansson. She gave a tragic turn in the blockbuster “Avengers: Endgame.” Then she turned around and showcased her comedic chops in “Jojo Rabbit” and did some heavy dramatic lifting in “Marriage Story.” Academy voters were so impressed with her acting showcase that Johansson went from zero Oscar nominations to two in just a single year.

Moss currently sits in 14th place in our combined odds for Best Actress for “Shirley,” but you would be wise not to underestimate her. Moss’ ability to jump from crowd-pleasing thriller to surreal art house flick is a testament to her skill as a performer. Such varied and dynamic roles are why the Emmys, Tonys and Golden Globes have taken notice. It’s about time for the Oscars to follow suit. 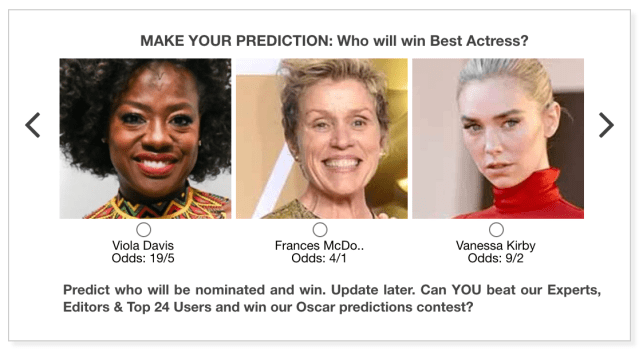