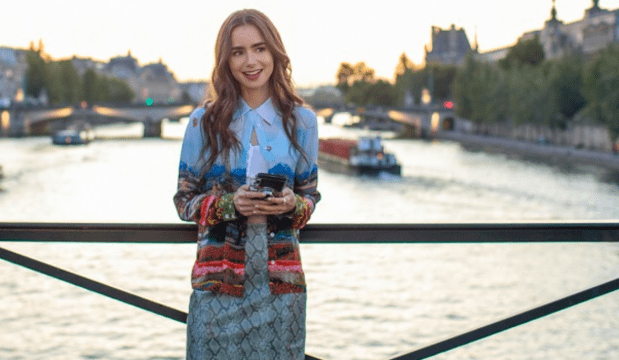 “Emily in Paris,” the new Netflix comedy series from “Sex and the City” creator Darren Star, has become a runaway hit for the streamer. It has struck a chord with audiences who are taken with the show’s sugary sweet escapism and plucky protagonist. With a flashy sensibility and an international flavor, there is a strong chance that the Golden Globes will take notice, especially for star Lily Collins.

She plays a young American woman who gets an exciting new opportunity as a social media marketer at her company’s French firm. Emily arrives in Paris barely knowing the language but bursting with self-confidence that her new French co-workers can find hard to take. As one might expect in the City of Love, she also finds herself caught up in a romance or two. The culture shock of Paris can sometimes turn Emily into the classic “Ugly American” stereotype (typically where food is involved), but Collins delivers a charming performance that her Emily is compulsively watchable, especially when her character is inevitably failing at something.

There are a number of factors in Collins and the show’s favor based on what we know of Globes voters taste: “Emily in Paris” it is a new hit show that people are buzzing about, it features a culture clash component as well as an enchanting style, and the star herself.

Not only is Collins is already a Golden Globe nominee for “Rules Don’t Apply” back in 2016 but she is also showbiz royalty, as the daughter of Phil Collins. The HFPA has a long tradition of honoring the children of famous entertainment figures, so the actress may have an even bigger leg up than she already has as a young ingenue in a splashy new TV show.

Much like Emily blowing into Paris at the beginning of the series, Collins might just find her way into the Comedy Actress category come what may.