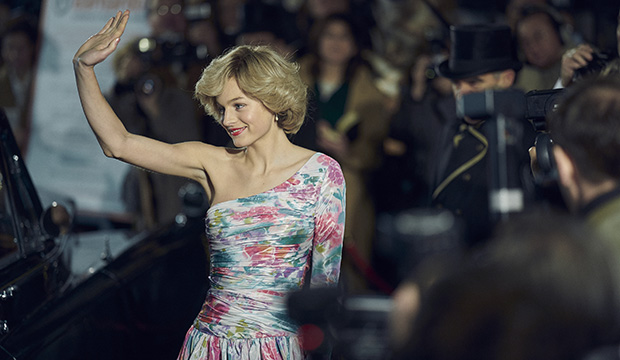 The princess is coming for the queen. After Netflix quietly moved Emma Corrin from supporting to lead for “The Crown,” she has rocketed up our Best TV Drama Actress Golden Globe odds and currently sits in sixth place. It’s honestly just a matter of time before she breaks into the top five — and maybe even dethrone her co-star Olivia Colman.

Corrin was previously in fourth place in our odds in the catch-all supporting actress category for her Season 4 turn as Princess Diana. Netflix also shifted Josh O’Connor (Prince Charles) up to lead and bumped Tobias Menzies (Prince Philip) down to supporting. The changes make sense since Princess Diana and Prince Charles’ storyline dominated the 1980s-set installment, which featured their 1981 wedding and early years of their tumultuous relationship. This is also a way for the streaming service to maximize nominations since the show has a handful of supporting actress contenders, including Season 4 newcomer Gillian Anderson, who is predicted to win for her performance as Margaret Thatcher.

The promotion for Corrin marks the first time “The Crown” is chasing double lead actress bids and is bad news for Colman, who’s been in first place in our odds this entire time. But Corrin arguably has a better shot of winning. This is her breakthrough role, playing one of the most beloved figures in history, and the Globes love their ingénues. This is also the only time the Hollywood Foreign Press Association can award the 25-year-old for “The Crown” since Elizabeth Debicki is taking over as Princess Diana for the remaining two seasons. If Corrin beats Colman, it’ll be shades of Jodie Comer (“Killing Eve”) and Jeremy Strong (“Succession”) winning their Emmys over their older, established co-stars Sandra Oh and Brian Cox, respectively.

Then there’s Colman’s sterling Globes record, which could work against her. She’s the reigning champ for playing Queen Elizabeth II on the royal drama, and only one person has ever defended her crown (no pun intended) in this category: “Homeland’s” Claire Danes in 2012 and ’13. There’s also not many multiple winners in drama actress — Edie Falco, Sharon Gless and Lee Remick are two-time champs, Danes has three wins, and Angela Lansbury has four. Voters could feel very “been there, done that” with Colman for this performance. On the other hand, you could say that the HFPA just can’t get enough of Colman, who has a 3-for-3 record at the Globes. But that has to end sometime, right? She’s also contending in film for “The Father,” so that’s an option to ensure she doesn’t go home empty-handed.

The next question is: who does Corrin bump out if/when she cracks our top five? Laura Linney (“Ozark”) is in second, followed by Jurnee Smollett (“Lovecraft Country”), Sarah Paulson (“Ratched”) and Comer.