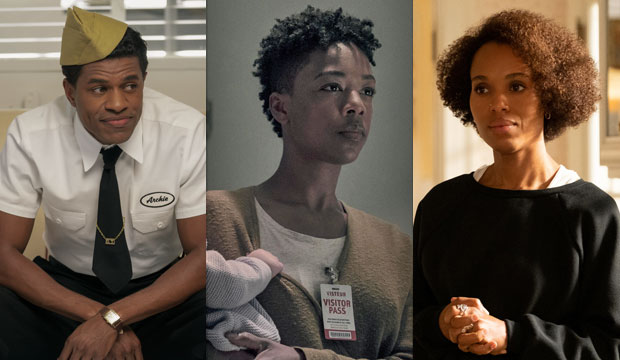 In a season of uprisings against anti-Black racism, it was fitting that the most nominated program at this year’s Emmys is “Watchmen,” which uses superheroes to explore how the country’s history of racial violence intersects with the justice system. But it goes beyond that. The Emmys made history by nominating more Black actors than ever before. Out of 102 total actors who received bids across various categories, 35 of them are Black — that’s more than one-third of all nominees. And just as interesting is who didn’t get nominated.

In a number of categories where Black actors were nominated, it was over their white co-stars, including in a few cases that were surprising. For instance, we were predicting that Tim Blake Nelson had the best chance of a nomination (and even a win) among the “Watchmen” supporting actors, but instead the academy nominated his co-stars Yahya Abdul-Mateen II, Jovan Adepo and Louis Gossett Jr. — the latter two of whom actually play the same character in different time periods.

So to me it feels as though voters marking their ballots amid the Black Lives Matter movement made conscious efforts to amplify Black voices. That’s encouraging, though there are still many voices the television industry needs to do a better job of amplifying. Asian actors are represented only by Sandra Oh, of Korean descent, for her starring role in “Killing Eve,” Indian-descended Dev Patel for his guest role in “Modern Love” and Filipino Rain Valdez for the short form series “Razor Tongue.” Latinx and Indigenous performers are virtually non-existent in this year’s noms — they’re underrepresented in media in general.

So while progress is worth celebrating, it doesn’t happen at the same pace for everyone.