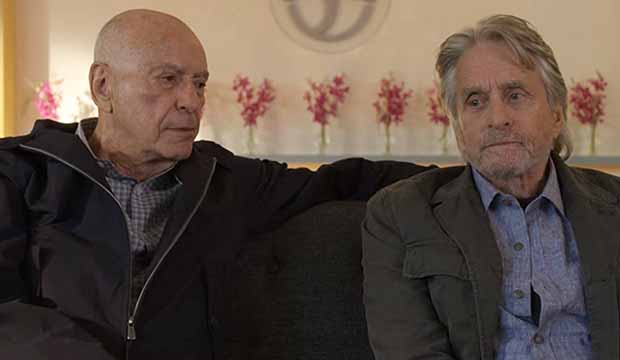 “Who do I have to bugger to get some help?,” Alan Arkin’s Norman Newlander bellows on behalf of his ailing friend Sandy Kominsky (Michael Douglas) in “A Secret Leaks, a Teacher Speaks,” the Season 2 episode of Netflix’s “The Kominsky Method” that Arkin has submitted for Emmy Awards consideration. Arkin returns to the Best Comedy Supporting Actor category for the second time this year for his role as a recently-widowed Hollywood agent who faces life’s ups and downs with his best friend Sandy at his side.

In “A Secret Leaks, a Teacher Speaks,” Arkin’s Norman accompanies Sandy for his first immunotherapy treatment for lung cancer. On their drive home, Norman gets an unexpected call from his rekindled old flame Madelyn (Jane Seymour), looking to mend fences after a recent fight. Happy to get the bleak-spirited Norman out of his hair, Sandy encourages him to take her up on the offer, and over dinner she explains why pushed him away.

Will Arkin’s delightful, curmudgeonly performance be the Emmy charm for the six-time nominee? See the pros and cons of Arkin’s submission below.

Arkin submitted a particularly strong episode to Emmy voters that boasts ample screen time and terrific range. The opening scene of the episode, set in a cancer-treatment center, might seem dour, but Arkin brings a macabre humor to the proceedings that provides some much-needed levity. The following scene features Norman’s hysterically dangerous driving and Arkin’s equally hilarious and profane outbursts at passing impatient drivers. Opposite Seymour, Arkin gets to tap into the emotional depths of the character, too, apologizing for scaring her off with his anger toward his estranged daughter, Phoebe (Lisa Edelstein), and his arc ends with a visit to her to show that he wants to make amends. The submission highlights just how effortlessly Arkin plays both the humor and heartache of his role.

The veteran actor is indisputably overdue for an Emmy win. Arkin has earned six nominations over the course of his fifty-plus year career––for “ABC Stage 67” (1967), “Escape from Sobibor” (1987), “Chicago Hope” (1997), “The Pentagon Papers” (2003) and two bids for “The Kominsky Method”––but he has yet to land the trophy. Voters may want to seize this opportunity to award Arkin with his first prize.

SEE Could ‘The Kominsky Method’ season 2 be Chuck Lorre’s ticket to his overdue first Emmy?

Although he has strong material in his submission, Arkin’s best scenes occur in the first half of the episode and he disappears from the screen for a few extended sequences while Douglas’ Sandy teaches his acting class. In one of those scenes, Arkin’s co-star Paul Reiser delivers a powerful monologue that closes the installment. Even with his large amount of screen-time, the shift in focus away from Arkin in the final stretch might affect how voters remember his performance when it comes time to cast their ballots.